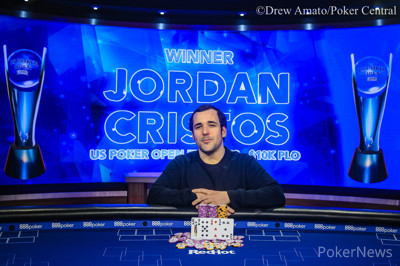 
Yesterday, we spoke about US poker player Jordan Cristos taking a major chip lead going into the Final Table of the US Poker Open Event #2 – $10,000 PLO. He had a lead of nearly a million chips over the next best, Cary Katz, and we’re not surprised at all to report the fact that he has gone on to ship the tournament.

The WPT champion Cristos had around $2.3 million in live tournament earnings prior to this victory and he went on to add $179,200 (~INR 1.27 Crore) to that total. The player also finished in 11th place in Event #1 of the 2019 US Poker Open and this win gave him a lead in the USPO Championship race as well, overtaking Stephen Chidwick.

“It’s cool. It’s sweet. The structure was turbo-ish and I feel like I didn’t out-skill anyone here. There were 50 people in the field and I was probably the 44th best player, honestly. It feels good to come out on top though. I don’t think I made many mistakes but I can’t really gauge whether or not I did because I’m no PLO expert, but I won so that’s good,” said Cristos after the win.

It didn’t seem to be much of a trouble for him since he went into the day with a massive lead, but he did find a very tough heads-up opponent in Germany’s Manig Loeser. The session went on for quite a while, with the chip lead exchanging between the two a few times. Eventually, Cristos managed to secure all the tournament chips and win the tournament.

For more updates on the ongoing US Poker Open happening in Las Vegas, keep following GutshotMagazine.com.