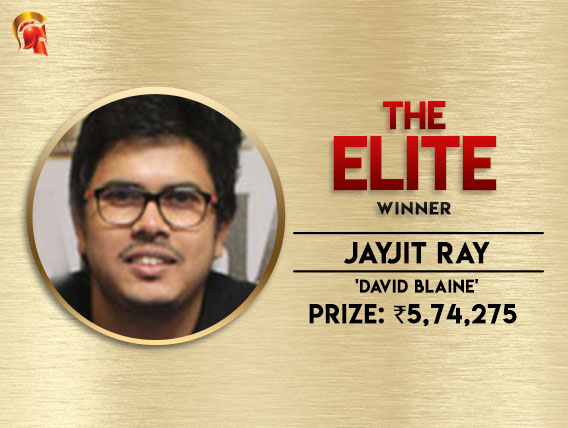 
Yesterday, Spartan Poker, one of the reputed poker brands in the country hosted The Elite 6-Max INR 18 Lakhs GTD, the feature Friday tournament. Since it has a buy-in of a good INR 11,000, the field also saw only the high rollers contesting in it.

The tournament began at 9 pm last evening and attracted a total of 247 entries (including 56 re-entries and 82 re-buys). After a long grind of over almost 8 hours, ending at 4.54 am, the winner emerged. Well-known community entity Jayjit Ray aka ‘David Blaine’ earned himself the coveted Elite title plus INR 5,74,275 as first-place cash prize out of the greater prize pool of INR 24.7 Lakhs.

Ray beat Archit Saraogi aka ‘ReMorse123’ in heads-up to claim the title. In the final hand, Ray was with a little over 2:1 chip lead. The hand was interesting. Both had suited hole cards. The flop of 7c Kh 8c gave Ray flush draw but he kept it calm and made a small bet, which Saraogi called.

The turn of 6c completed Ray’s flush and saw him bet a small one again, luring his opponent into the trap and it worked. Saraogi bluffed and went all-in on 5d river and Ray called his shove. In the showdown, Ray showed a King-high flush and sealed his victory against Saraogi’s high card King. The latter had to settle for INR 3,89,025, which is not a bad amount either.

Ray is a significant figure in the community. He has an impressive online record. He is also part of PokerGuru Staking (formerly AceJack Stable) and has been around since quite some time. Among his major online wins include winning a Destiny tournament on Spartan in its 7th edition, winning PokerBaazi Summit last October.

On the live felt, he won Baadshah Live Tournament (BLT) High Roller last October, where he made his best live cash of INR 9 Lakhs. This is a sizeable amount he won last night in Elite, and it will surely help him maintain his bankroll and make him play more in the upcoming exciting range of tournaments in 2019.