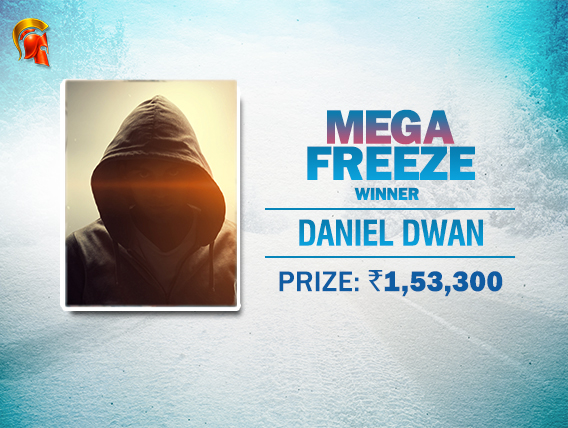 Every Monday, The Spartan Poker hosts the Mega Freeze tournament and just as the name suggests, this is a freezeout tournament wherein players once busted cannot return to play the tournament. This brings out the skill element much more and players who win this can be extremely proud of their achievements.

Now yesterday’s Mega Freeze INR 6 Lakh GTD was an INR 5,500 buy-in tournament that commenced at 7:30pm as it does at the start of every week. This is one Spartan’s featured tournaments and performances here count towards the monthly Hot Tournament Leaderboard, where INR 10 lakh is up for grabs to the most consistent performers.

Yesterday, 112 players entered the Mega Freeze and from them, it was ‘daniel dwan’ who ended victorious, beating a tough field and being awarded with INR 1,53,300 for this massive effort. The top 15 players were paid out a minimum of INR 10,800 but none were as profitable as daniel dwan last night.

Another player who has been among the pay-outs in several to tournaments in the last few months is Goonjan Mall aka ‘gmtesting’. He has several online titles to his name from across the different platforms, and yesterday, he missed out on another title on Spartan, finishing runner-up to daniel dwan.

The tournament lasted just 5 hours and the final hand took place in Level #35, with the blinds relatively low at 3,400/6,800 – 680. Before this final hand, daniel dwan had a chip lead of around 1.4:1 and it was pretty much even-stevens until an exciting hand that saw daniel dwan being crowned winner.

Mall was dealt Kings and he raised just 10k pre-flop, which was met with a 26k re-raise from daniel dwan and another re-raise of 64k from Mall, before daniel dwan shoved all-in and Mall made the call. daniel dwan had Jacks and Mall was clearly ahead. However, the board rolled out Jc 3d 6h 5s Ah and daniel dwan won with Three of a Kind Jacks as Goonjan Mall had to settle for the runner-up prizes of INR 1,05,600.