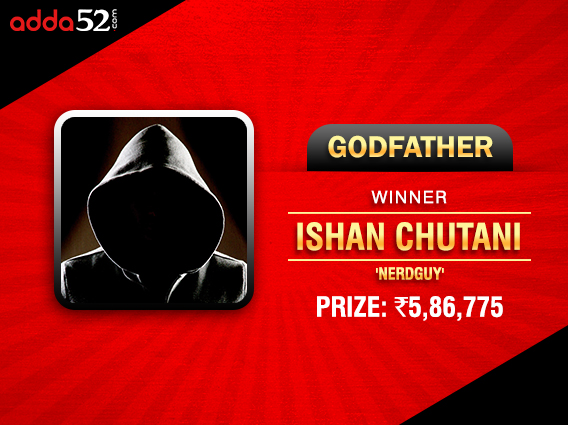 
Godfather, currently in its 7th edition, is one of Adda52’s feature tournament, played every Thursday. The tournament is a major one in their line-up since it also gives a chance to 9 winners, a shot at a Vegas Platinum Package worth INR 9 Lakhs which includes a WSOP ME ticket worth $10k, as well as travel expenses.

Yesterday’s Godfather INR 20 Lakhs GTD began at the usual time of 8 pm and ended after a long and tiresome grind of over 7 and a half hours at 3.41 am today. A total of 479 entries (223 re-entries) were made in the tournament and each of them coughed up the INR 5,500 buy-in. The guarantee was crushed by a sizeable margin of almost INR 4 lakhs, inflating the prize pool to INR 23,95,019. Out of this giant amount, the top 49 places were paid for a min-cash of INR 13,173.

Finishing on the top of the field and bagging the Godfather title was Ishan Chutani aka ‘nerdguy’. He took home INR 5,86,775 as first place cash prize, as well as a spot into the Godfather Finale SnG, after beating ‘jaydeepreddy9’ in heads-up. The latter also earned a sizeable cash prize of INR 3,47,275 for his finish.

The winner’s surname is connoted more frequently with well-known online grinder Sahil Chutani, but guess what, Ishan is his younger brother. Ishan is relatively newer to the scene but already has a few staggering achievement to his name, including one of Adda52’s biggest regular tournaments, Millions 6-Max. He won the tournament last September and earned a cool INR 7,50,000 as first place cash prize and has made many deep runs on the platform.

This isn’t Ishan’s first Godfather win either, having first shipped it in Godfather 4.0 last year and earning a massive pay-check there too, but the Vegas package ultimately went to another well-known community entity Shravan Chhabria. This second Godfather win has also earned him a huge bankroll boost and he’ll be hoping to use it efficiently and make more wins in the future.

Given the tournament’s reputation over the years and the prospect of going to the biggest yearly poker series, WSOP, there were a lot of top pros and high-stakes grinders in contention. Some of them ranking high include Srihari Bang aka ‘zombieballs’ (3rd – INR 2,39,500), Nikita Luther aka ‘nikitaluther’ (7th – INR 65,863) who won her maiden DPT title this year, and Siddarth Karia aka ‘skaria1’ (9th – INR 38,320).