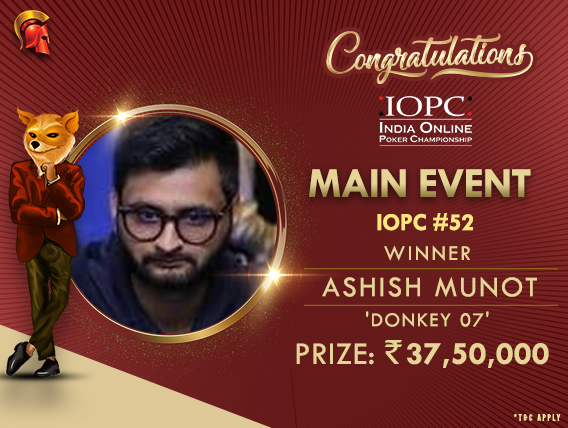 
It has all come to an end after the most intense 10-day period on the virtual felts of The Spartan Poker. With a series guarantee of INR 8.5+ Crore, the latest edition of the India Online Poker Championship (IOPC) was a record-breaking series and yesterday was the final day of play, with the very prestigious IOPC Main Event still to be contested.

The tournament kicked off at 5:30pm last night with a buy-in of INR 11,000 and a whopping tournament guarantee of INR 1.5 Crore, the biggest online poker tournament to take place in India yet. All in all, 1,354 entries joined the competition and what followed was some very exciting poker action for nearly 11 hours!

It was 4:18am this morning when the tournament finally came to a close and the winner turned out to be none other than the young and talented poker pro, Ashish Munot. Not just has he taken away a massive amount in prize money, but he also goes down in the history books as the biggest winner from a single online poker tournament in India. Munot is a part of the AceJack Stable, which was recently rebranded to PokerGuru Staking.

You’re always rewarded well on The Spartan Poker and for Munot, yesterday would’ve been one of the most rewarding days of his life, taking away a humongous cash prize of INR 37,50,000 for beating a very strong field and winning the IOPC Main Event. He has added to his long list of poker victories and proved once again how poker is all about skill, and not luck.

As the tournament moved into the final few tables, players were more careful as the big pay-outs were being approached. The top 10 finishers were all guaranteed 6-figure scores and the first to get one was IOPC Flash winner Deepak Bothra aka ‘chimpoo’. He was soon followed by Bibek Karki aka ‘BIBEK329’ in 9th place, Apratim Sharma in 8th and Sajal Gupta in 7th.

The top three finishers were each guaranteed 7-figure scores and the first to bust among them was Varun Gupta aka ‘VG92’ who has been on a good run in online poker of late. He finished 3rd for INR 12,52,500 which led to the start of heads-up play between Munot and Ram Kakkar aka ‘TheLagLawyer’.

Kakkar is another accomplished player, with achievements in both, the live and online circuits. However, he wasn’t able to get past Munot earlier today morning, eventually having to settle for the runner-up prize of INR 22,50,000, which is by no means a small amount to win in online poker.

The last hand saw Kakkar going all-in pre-flop with a chip deficit of a little more than 1:2. He shoved his 7.9 million chips into the pot with pocket Eights and Munot made the call with pocket Fives. Kakkar was ahead initially but the board ran out 9d Th 5h Jc Ah, with Munot flopping a set and taking down the title. We congratulate the top winners of last night’s IOPC Main Event and you can keep reading GutshotMagazine.com for similar updates on the biggest and best online and live poker tournaments in India.