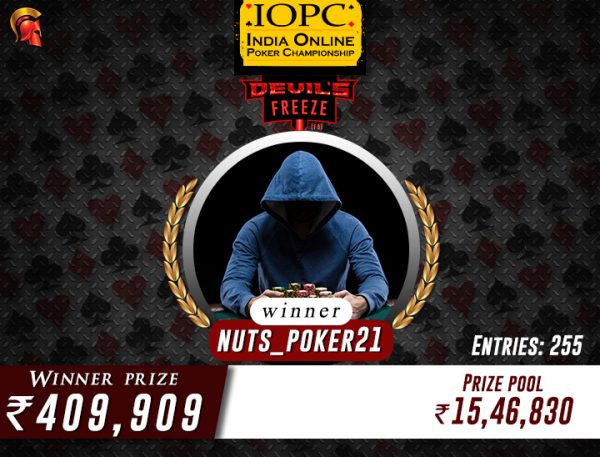 The biggest online poker festival of India, India Online Poker Championship (IOPC) concluded its Day 4 on TheSpartanPoker.com last night crushing all guarantees in individual prizepools. ‘GoMuckYourself’ continues to hold onto the lead on the IOPC leaderboard which is largely due to claiming the Two of a Kind (2.o.K) tournament a couple of days back plus finishing in the money in another side event. ‘GoMuckYourself’ is followed by Vinod ‘TheMuffinMan’ Megalmani, who was the other winner of the 2.o.K. Chennai’s Aditya ‘SuperuSer’ Sushant is in third to round off the current top 3 of the IOPC leaderboard. There’s rewards aplenty for the winner of the leaderboard as 27 lakhs in guaranteed prizes will be paid out including a brand new Jeep Compass and cash prizes for the top 9 places.

The very first event of the day drew 513 entries making a prizepool of INR 256,500. Top 40 places took a share of the prize pool with a min-cash of INR 1,539. ‘Sensex’ shipped the tournament outlasting these entries for INR 67,972. ‘Sensex’ defeated ‘fsociety’ in the final round who took home INR 43,332 for the runner-up finish.

The second event of the day drew 272 entries creating a prizepool of INR 190,400 out of which top 25 places took a share of the prizepool with a min-cash of INR 1,800. ‘SmackThatAce’ claimed the title of this tournament for INR 50,456 defeating ‘DonnaPaulsen’ at second place. ‘DonnaPaulsen’ collected INR 31,416.

The very next event saw a participation of 586 entries where Mumbai-based film director Anish ‘adshark’ Dedhia emerged victorious in this tournament for INR 79,500. Dedhia has also won Spartan Super Series (SSS) Event #17 back in March 2017 and now he added another title to his kitty with this winning performance at the IOPC. Dedhia defeated Vikram ‘NeuroScientist’ Singh in the final battle who is also an IOPC side event winner claiming Event #10 this past Saturday. ‘NeuroScientist’ took home INR 48,750 for the second-place finish.

Speaking to Gutshot, Dedhia said, “My experience playing on TheSpartanPoker is always memorable. It has grown as a poker platform every time I come back to play. It’s by far the best site in India in its offerings for poker players. Always a pleasure being a part of the IPC team. I can’t wait for them to come back to the live tournament scene. I’m really looking forward to some of the tourneys in this IOPC especially the Main Event. I hope this run continues and the Jeep Compass is too tempting!!! See you at the tables!”

The last event of the day drew 607 participants generating a prizepool of INR 12,14,000 which was distributed to top 50 places with a min-cash of INR 6,070. It was Sriharsha ‘Indiandurrr’ Doddapaneni who claimed the title for INR 315,640. Doddapaneni defeated ‘Nomercy3801’ in the heads-up battle who collected INR 197,240 for the finish.

This was the Day 4 round-up of IOPC, where ‘GoMuckYourself’ has taken a massive lead on the leaderboard as seen below:- 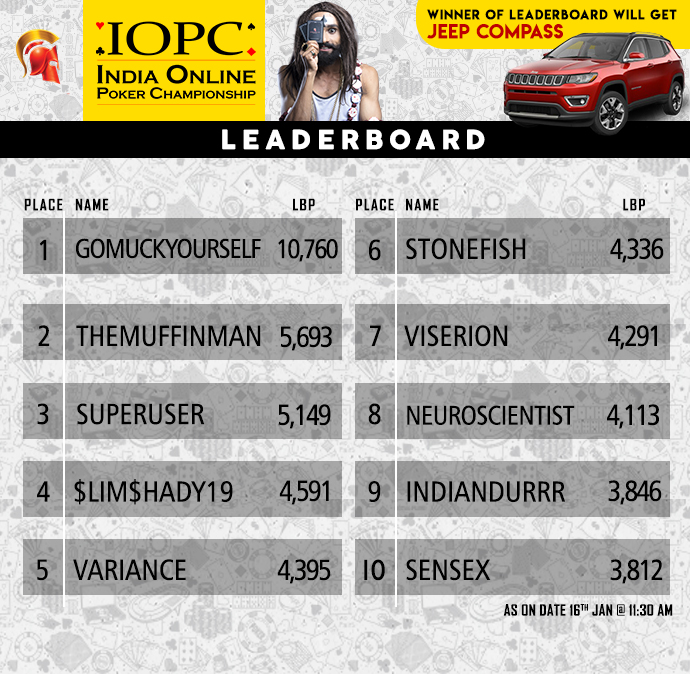