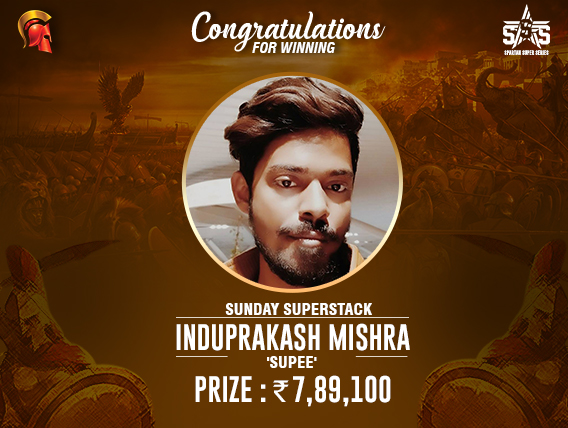 
Online poker is booming in India which means that you will often find extremely talented players playing on the various platforms available. Thus, winning a tournament online may not be too easy, especially a featured tournament in the Spartan Super Series (SSS), which is one of the biggest online poker series in India.

Hosted on Spartan Poker, a total of six tournaments were played yesterday, the final day of this month’s SSS series. Apart from the Main Event and four side events, the Sunday SuperStack INR 30 Lakh GTD tournament was also lined up, with the guarantee eventually being passed by a little over thirty thousand rupees.

The buy-in to this tournament was set at INR 5,500 and eventually, a massive field of 607 entries had paid to register, with only 60 finishing in the money and getting paid out a minimum of INR 12,140 each. There was a lot of back and forth action taking place over the 8 hours and 46 minutes that the tournament was played, but finally, Induprakash Mishra was the player who ended with all the tournament chips in play.

Mishra plays as ‘supee’ on Spartan Poker and he’s a regular on their platform, with a number of cashes over the months. This however, turned out to be his biggest victory online, after previously finishing on the Final Table of this tournament twice. Here, he manged to take away the title and let’s not forget about the overwhelming first-place prize of INR 7,89,100.

Last night would’ve been a memorable one for Mishra, as he outlasted some of India’s top online poker players, including ‘Fraser16’ in heads-up, who walked away with a decent enough prize of INR 4,85,600. The Final Table itself saw quite a few pros including Gokul Raj (3rd), Siddarth Singhvi (4th) and Shravan Chhabria (5th), who finished runner-up in Daredevil just the previous night.

Our coverage for the Spartan Super Series ends today but let’s not forget that there’s always a lot of action taking place throughout the year across all major poker platforms. So, stay tuned to GutshotMagazine.com for all updates on the same.