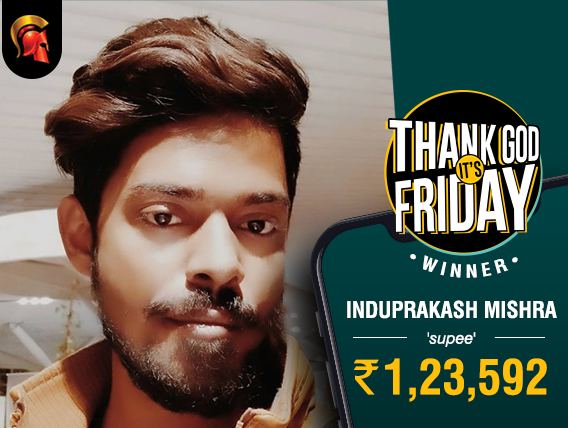 
Spartan Poker happens to be one of the best online poker platforms in India and if you manage to win a tournament here, you know you’re doing well as a poker player. Similarly, for Induprakash Mishra, he can be very proud of himself, having won a couple of major titles on Spartan in recent times.

In February this year, he shipped the SuperStack title on Spartan and once again, he can wear the winner’s crown with pride. Fridays are known for Elite and TGIF tournaments, where players with varying bankrolls get together to play these popular tournaments simultaneously.

Last night, Mishra, who plays under the name ‘supee’ on Spartan, beat a tough field to ship the TGIF (Thank God It’s Friday) tournament for a healthy bankroll addition of INR 1,23,592. The tournament has a buy-in of INR 2,200 and yesterday, the prize pool was passed ever so slightly, with 169 players, 56 re-entries and 129 re-buys in all.

This increased prize pool was shared among the top 31 places with the minimum cash prize being INR 6,230. As for Mishra, he didn’t want anything less than the top prize. He had his eyes on the prize and nothing could stop him, eventually taking down ‘siddchat’ in heads-up, with the latter settling for the runner-up prize of INR 1,07,550.

With pay jumps being kept in mind, none of the players involved in 3-way play wanted to take much of a chance. They cut a 3-way deal on the FT and decided to share the spoils basis on everyone’s respective chip stacks, which saw Mishra becoming the winner and taking away the biggest prize. Slightly behind in chips but still part of the deal was ‘Nawab1305’ who finished 3rd eventually.

Tournaments such as these take place on a daily basis across various platforms in India. For all updates from Spartan Poker as well as other poker stories from across the world, stay tuned to GutshotMagazine.com.