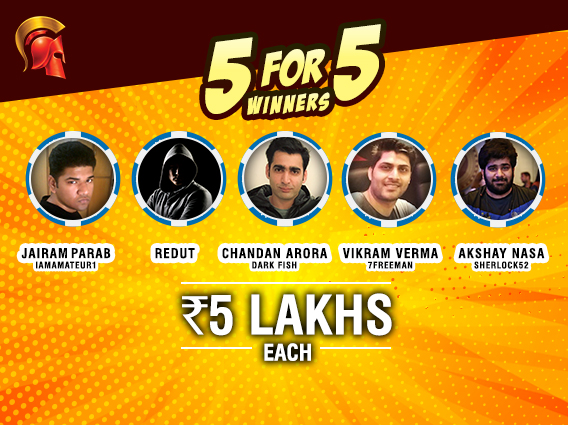 The ‘5 FOR 5’ is one of The Spartan Poker’s latest tournament offering which came out just a couple of months back. Last month was the first edition of this tournament and yesterday was the second, with five players taking away massive individual prizes of INR 5,00,000 each.

This Spartan signature tournament kicked off at 6pm last evening, and everyone would’ve been looking for a money finish in the 5 for 5, with big prizes on offer. Unlike other tournaments which play down to the winner, this one comes to a halt when play reaches 5-way play, something that happened at 3:30am this morning.

With a buy-in of INR 5,500, a total field of 677 entries registered to October’s 5 for 5, with a prize pool of INR 33,85,000 being created and the top 50 places eventually being paid out a minimum of INR 10,155. The players who won INR 5 lakh each for reaching 5-way play included Jairam Parab aka ‘iamamateur1’, Chandan Arora aka ‘Dark fish’, ‘ReDut’, Vikram Verma aka ‘7freeman’ and the very famous Akshay Nasa aka ‘sherlock52’.

Six players were left in this long grind and play had reached Level #52 by the time the final hand was played, with the blinds having reached 17,500/35,000 – 3,500. ‘shipsuperior’ was the shortest stacked among these players and he shoved all-in pre-flop with pocket Fives, getting a call only from ‘ReDut’, who was pretty short stacked himself. Jain showed Ac Jd and the board opened As 8c Jc 6h 3h, with ReDut winning with Aces and Jacks, thus eliminating shipsuperior and putting an end to the tournament.

Those who were short stacked would’ve been pretty happy to have finished among the winners, especially Nasa who barely had around 200k chips left, and Verma, who had around 350k chips in play. While no one else was close to a million chips, Jairam Parab had an overwhelming chip lead, with over 8.4 million chips, so he would’ve been quite relaxed as the end was nearing.

Eventually however, the chip counts didn’t really matter as all of these 5 players took home INR 5 lakh each, as the specialty of the tournament is that it has not one, but five winners. Gutshot caught up with Chandan Arora, one of the winners, who has also won the 2oK tournament in the past. He said, “The experience was really good. It was one of the most exciting FT. Key hand was when ReDut shoved in any two spot for him and I woke up with KK. After winning that hand I was 2nd in chips and I knew I just need to wait it out and soon two short stacks got allin and I got the 5L prize.”

Gutshot also had a word with Jairam Parab. He said, “5 for 5 is a fun and unique format. Kudos to Spartan for constantly coming with new and exciting tourney formats. I entered final table as a chip leader. After winning huge pot against 2nd chip leader, my job became pretty easy. Since it was huge pay jump from 6th to 5th position, I kept on applying ICM pressure. I had fun playing FT.”