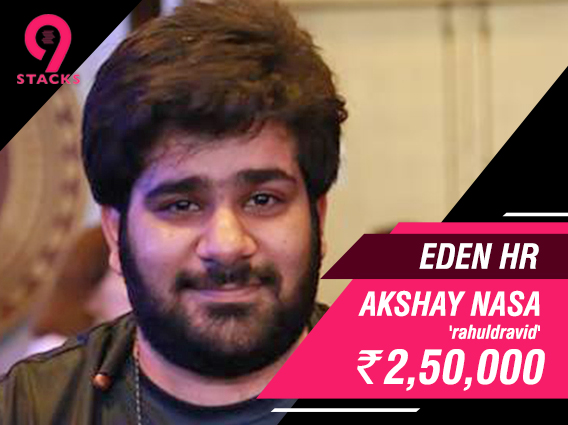 
Akshay Nasa has made headlines again. After earning a title in the prestigious Spartan IOPC this January and even topping the IOPC Leaderboard to win a brand-new Skoda Octavia, the ace player has once again grabbed a title, this time on 9stacks.

Last night, 9stacks hosted the Eden HR INR 10 Lakhs GTD event on their platform at 8 pm in the evening. The tournament went on for almost 8 hours, ending at 2.50 am today morning. A total of 99 entries (including 20 re-buys) were attracted to the felts and each chipped in the high INR 11,000 buy-in to play the tournament.

Nasa, playing under ‘rahuldravid’ (no prizes for guessing his favourite cricketer) won the Eden HR title and it’s a fitting one, since the Eden Gardens cricket ground in Kolkata saw Rahul Dravid showcase some of the most superior innings of his career. Nasa took home INR 2,50,000 as first-place cash prize on 9stacks yesterday. He beat ‘Manishmalik007’ in heads-up who settled for INR 1,65,000 as runner-up cash prize.

Nasa’s record is phenomenal. He has made plenty of online title wins across leading poker platforms in the country. He has won various leaderboards like PokerBaazi PPL Autumn LDB, Adda52 Ace Race 2 LDB, etc. Winning a leaderboard means the player is packing some serious dedication for poker, and we can easily say that it holds true for Nasa too. He also has a strong live presence and was thus selected as one of the Team India members for PPWC Teams Event in Manila last month.

9stacks has recently revamped its weekly tournament offerings. The Prime-Time slot of 8 pm will see weekly tournaments like Wankhede on Mondays, Oval on Tuesdays, Wanderers on Wednesdays, Gabba on Thursdays, Eden HR on Fridays and Lord’s PLO on Saturdays. Stay tuned to GutshotMagazine.com for more such tournament roundups and results from 9stacks and other platforms.