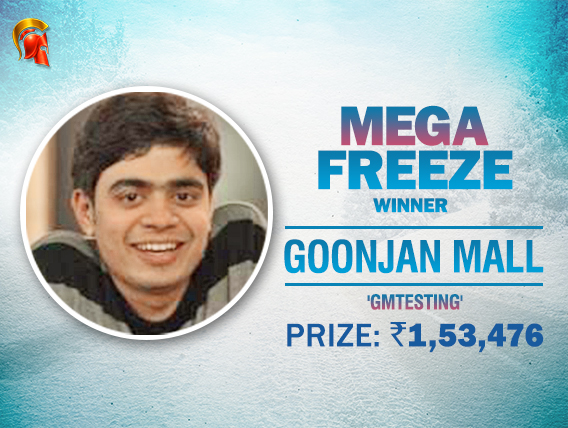 
Spartan Poker, home to some of the best feature tournaments in the online poker landscape in India, hosts some pretty exciting tournaments every day of the week. Last night, being a Monday, the Mega Freeze INR 6 Lakhs GTD was hosted on its platform.

The tournament began at 7.30 pm yesterday evening and attracted 122 unique players to the felt. The format is a freezeout one, so you can only buy-in once and if busted, better luck next time. The field fiercely contested for almost 6 hours (till 1.21 am) until the winner was declared.

Goonjan Mall aka ‘gmtesting’, acclaimed community player, won the tournament for INR 1,53,476, beating another well-known entity Gokul Raj aka ‘Super Kings’ in the heads-up battle. The latter recently won Sunday’s 5 For 5 for INR 5 Lakhs and must’ve proved to be a tough nut to crack for Mall.

The last hand of the heads-up match saw Mall already with an overwhelming chip lead and it wasn’t a tough decision for Raj to go all-in pre-flop with 9d Ad. Mall called with Jc Ac. The board came to Qs 3d 3h Tc Ks and Mall showed an Ace-high straight which had Raj’s Threes beat. Raj eventually settled for the runner-up cash prize of INR 1,03,700.

Mall is a well-respected figure in the community and has an impressive record of shipping tournaments and running deep. He recently made top 10 finishes in many tournaments and finally put a mark and shipped the Mega Freeze. This isn’t the first time he shipped the Mega Freeze, having previously won it back in September 2018. He also shipped the Spartan Flash last November, among many other wins on Spartan like the Elite, Sunday SuperStack, etc. This is a good amount and it will in no time be converted into more wins, considering Mall’s top skills.

Apratim Sharma aka ‘checm@te’ finished 18th and became the bubble boy in the tournament, missing a pay-check by a hair-length. Many other notables were in the run last night but unfortunately didn’t finish in the money. Keep reading GutshotMagazine.com for more such tournament roundups, results and for general poker news from around the world.