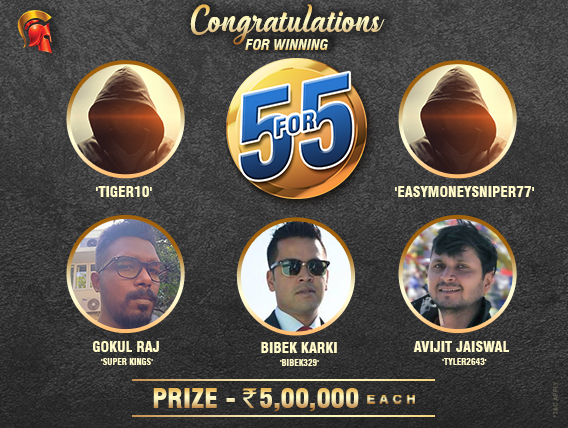 
Yesterday saw Spartan Poker’s signature 5 For 5 INR 5 Lakhs for top 5 players being conducted. As is regular, the 5-for-5 is conducted on the last Sunday of every month on the platform, and yesterday’s tournament attracted a staggering turnout, with a staggering prize pool being created.

The tournament attracted a total of 739 entries (including 119 re-entries and 264 re-buys). It began at 6 pm yesterday evening and was concluded at 2.35 am today morning, ending a long and tiresome grind, but fruitful for those who made it to the top.

Emerging victorious in the tournament yesterday were 5 players. Bibek Karki aka ‘BIBEK329’, ‘Tiger10’, Gokul Raj aka ‘Super Kings’, Avijit Jaiswal aka ‘tyler2643’ and ‘EasyMoneySniper77’. They all have each won INR 5 Lakhs as first place cash prize after competing for over eight and a half hours almost non-stop on Spartan.

The last hand of the tournament saw the 6th place finisher ‘Fish2050’ get busted in the 6-way for INR 2,54,031. While everyone else on the FT folded, Fish2050 went all-in pre-flop, received a call by Tiger10, and the battle was on. Fish2050 was with 9s Ah and Tiger10 Td As. The board came to Jd 6h 4c Jh Qc and Tiger10 won the pot with Ace-kicker. The tournament stopped then and the final 5 were awarded INR 5 Lakhs each.

Coming to the winners, Gokul Raj easily has the most wins and deep runs among the winners. He recently won the IOPC SHR for INR 28+ Lakhs last month. He has won feature tournaments across leading platforms, some of which are Adda52’s Godfather and Mega Suits last December. He has also bagged Spartan Mega Freeze and 2018 July IOPC Event #55 titles previously, along with making plenty of deep runs in other tournaments of the same stature.

Bibek Karki is also a regular online and live player who has made many deep runs in earlier online tournaments. He was also playing in 2018 WPTDS India Main Event and finished 21st for INR 2.99 Lakhs last November. On the online felt, he even has an IOPC title to this name, winning it back in July 2018. Yesterday’s win will see him add another significant amounts to his bankroll.

Karki spoke to us about the win saying, “I late registered in 5 For 5 and after firing multiple bullets and being as low as 8 big blinds at one point, I got a sick run. I was an interesting experience playing a tourney where I didn’t have to win. I had a huge chip lead in the Final Table and was just raising any two cards and calling with shit hands since no one wanted to get eliminated. I took it upon myself to eliminate the smaller stacks. It was quite fun in this one after my disappointing end to the Game Changer.“