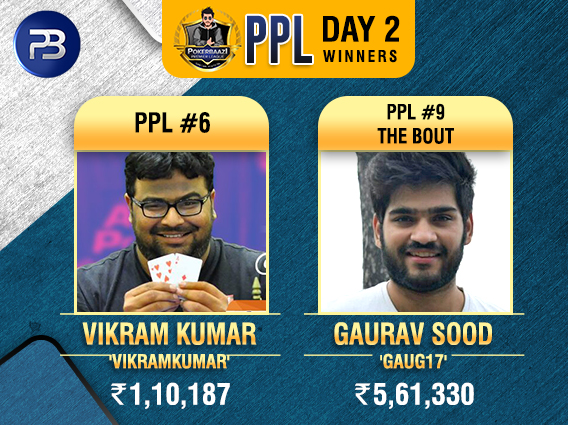 
Another edition of the PokerBaazi Premier League (PPL) began a couple of nights back and once again, it has been a very successful two days on PokerBaazi so far. We’re getting very used to seeing guarantees being crushed in every tournament and new winners emerging daily.

Yesterday was Day 2 of the current PPL Special Edition and among the title winners on the day were the very popular Vikram ‘Lungi’ Kumar and Gaurav Sood. A total of 5 tournaments were played, of which The Bout INR 25 Lakh GTD was the biggest tournament of the day. Keep reading for a complete summary of PPL Day 2…

The day kicked off at 4pm last evening and a total field of 583 entries registered to the tournament with a buy-in of INR 1,100. It was a real star-studded affair as two very popular faces battled it out in heads-up. Vikram ‘Lungi’ Kumar aka ‘VikramKumar’ and PokerBaazi Team Pro Maria Kirloskar aka ‘MariaKirloskar’ reached heads-up but the former ended victorious, taking away a payday of INR 1,10,187.

The second tournament of the day was played in the 7-Max and freezeout format, with a total of 188 players registering to the tournament. INR 2,500 was the buy-in to the tournament and here, there’s no return once you bust your stack. The top 24 places were paid, and the eventual winner turned out to be ‘dybalamask’ who has preferred to keep his identity a secret. For PokerBaazi regulars however, you would recognize this name as dybalamask is always in contention at major tournaments. Here, the player won INR 1,20,750 after beating ‘Illusionist’ in heads-up, who won INR 84,650.

The next tournament lined up was in the DeepStack Turbo format, where a large field of 480 players joined the tournament. From them, only the top 54 would eventually make it to the money and the highest pay-out of the tournament went to the eventual winner ‘BIT00Poker’, who bagged INR 1,20,600 for finishing first. In heads-up, the player beat ‘miyagi’ who won INR 84,540 as runner-up prize.

This was the featured tournament of the night and the guarantee received a boost for this PPL Special Edition. With a buy-in of INR 5,500, a total field of 594 players signed up and this made the prize pool swell to nearly INR 30 Lakh. The top 72 players were all guaranteed a minimum pay-out of INR 9,207 and from them, Gaurav Sood turned out to be the wealthiest of the night. Playing as ‘gaug17’ on the platform, Sood has been having a pretty decent run across all online poker websites in recent months. Here too, he topped this field that was packed with India’s best players, winning the massive top prize of INR 5,61,330. In heads-up, he was pitted against ‘dilbaghsingh’ who had to settle for INR 3,93,525 for finishing second. It would’ve been a very satisfying Monday night for both these players.

The 8-Max tournament was the final one scheduled for PPL Day 2 and here, a total playing field of 490 players was created, of which the top 63 spots were paid. Eventually, the top payday went to an anonymous player called ‘coldplay12’ and there are no prizes for guessing what the player’s favourite band is. Here, he defeated Prince Singh aka ‘NaNki’ in heads-up, winning INR 3,57,026 in prize money while Singh also received a decent pay-check of INR 2,50,267. Gaurav Sood’s run continued here as he finished 3rd for INR 1.6 Lakh and ended the day at the top of the PPL Leaderboard as well.

For all timely updates on the ongoing PokerBaazi Premier League (PPL) and all other major poker tournaments in India, keep following GutshotMagazine.com.