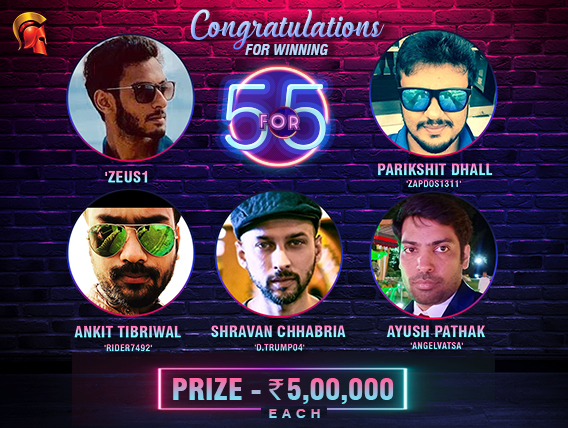 Dhall, Tibriwal, Chhabria, Pathak among May 5For5 winners

Every month, Spartan Poker hosts one of their signature tournaments called 5For5, where, as the name suggests, INR 5 Lakh GTD is the prize given away to each of the top 5 finishers of the tournament. It’s one of Spartan’s most unique tournament offerings as here, you don’t have to finish first to be a winner. All those in the top 5 are treated equally with respect to prizes, regardless of how big each stack is!

On Sunday, another edition of 5For5 took place and the winners included a few familiar faces as well as a couple who you wouldn’t have heard of too many times in the past. These were Shravan Chhabria aka ‘D.Trump04’, Parikshit Dhall aka ‘zapdos1311’, Ankit Tibriwal aka ‘Rider7492’, Ayush Pathak aka ‘angelvatsa’ and ‘zeus1’.

These guys, along with everyone else in the field of 799 entries paid the price of INR 5,500 to enter the tournament and what began at 6pm on Sunday evening ended at 5:06am on Monday morning. This nearly 12-hour grind would’ve been an extremely tiring one but for those who made it to the top five, it would’ve been very pleasant.

Chhabria is the most well-known player from among the winners and talking about this latest victory, he said, “Well it feels good to get some scores on Spartan Poker. It’s a unique tournament and I had a massive chip lead on the FT, but I almost managed to ruin it. I’m glad I eventually managed to slip through.”

Ayush Pathak is another player who finished in the top five and was thrilled with this win, coming through from an INR 330 satellite. Pathak recounted the journey to Gutshot, saying, “It was an amazing experience, even more so because I won the ticket from a satellite for a mere Rs.330. I think 5For5 is one of the most exciting tournaments because of its unique format, which makes the ground more even between amateurs and pros.”

“I had earlier gone deep in the Millionaire couple of times, but this is my biggest win by far. I think Spartan Poker is the best platform for amateurs and pros alike. The best thing about Spartan is that they keep experimenting with formats and come out with amazing tournaments like 5For5, 2.o.K and others.”

The other winners were also pretty delighted, and who wouldn’t be? Talking about the victory, ‘zeus1’ said, “I really enjoyed playing the tournament. It turned out to be a 12-hour game in total, but it was worth it in the end! Love the GTD tourneys every day and the interface on Spartan!”

The unfortunate player who missed the 5L GTD prizes was Ratul Steves aka ‘Atriohm’ who ended up busting in 6th place. Dhall shoved with Tc Jd and while everyone else folded, Steves called with the shortest stack prior to the final hand, holding 8c 7s. The board rolled out Jh 6s Ad 7d Ts to give Dhall two pairs and knock out Steves, who won INR 2.48 Lakh in prize money.

For all updates on the top online poker tournaments and promotions, keep following GutshotMagazine.com.