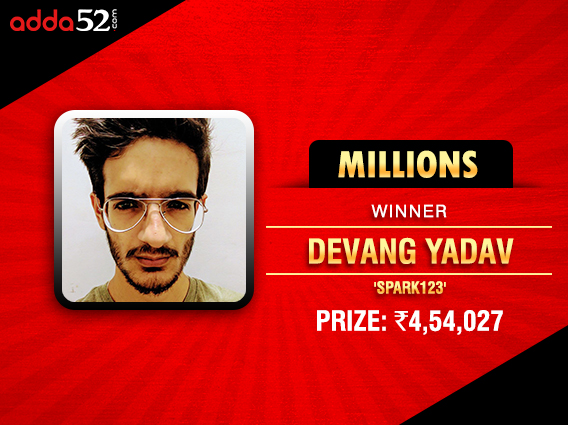 
Yesterday, being Sunday, saw various high-stakes tournaments being hosted over reputed platforms in India. Among them was Adda52 Millions. The tournament is the beast of the week on their site and features a massive INR 20 Lakhs in guaranteed prize money.

Last night’s tournament saw a total of 199 entries, including the 65 re-entries. With the buy-in set at INR 11,000, it was a high-stakes affair for the Indian crowd, so a lot of pros with fat bankrolls were seen in the mix.

The tournament began at the usual time of 8 pm and ended at 3:58 am today morning. Emerging victorious from the 8-hour long grind was Devang Yadav aka ‘spark123’, taking home a colossal INR 4,54,027 as 1st place cash prize. Yadav and his heads-up opponent ‘darkfish15’ made an ICM chop which saw Yadav ship the title, having a slight edge in terms of chip counts. The runner-up also bagged the sizeable amount of INR 4,26,973 as the runner-up prize.

Yadav is not exactly an unknown player, having made previous deep runs in plenty of tournaments online. The Gutshot Team had previously interviewed him after he won the first Destiny 2.0 on Spartan back in 2017. Talking about the future of poker in India, he had said, “With poker scene in India evolving constantly and countless opportunities for us to showcase our talent and get rewarded for it is super exciting.” This win yesterday will surely add a significant amount to his bankroll and will enable him to play more in future tournaments and ship a lot more!

Among the 21 players who were paid out in this tournament on Adda52, there were some known names in the mix too. Fourth to rank in the tournament was Harshit Chopra aka ‘hashstack’, taking home INR 1.8 Lakhs. Fifth place was filled by the well-known player Rajat Sharma aka ‘Oshoswami’ for INR 1.25 Lakhs.

Other knowns include Pranav Khandalkar aka ‘pkpok’ at 7th with INR 71K, who just recently won a hefty package to Goa on Adda52. Varun Gupta aka ‘VnutsG’ cashed out at 9th place for INR 45K. Finishing at 13th place was the person who bagged the chance to play with Patrik Antonius in Goa recently, Siddarth Singhvi aka ‘badtameez_donk’. Finishing 18th and 21st were Shravan Chhabria aka ‘sweatmyass13’ and Sahil Mahboobani aka ‘ImHighIshove’ winning INR 18K each.