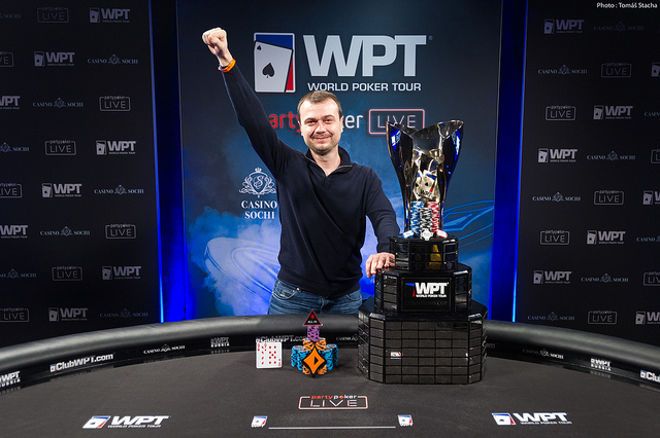 
World Poker Tour is currently hosting its first ever tour in Russia, the WPT Russia, and the ~$3,000 Main Event of the series is already in the books, which ran between 21st-27th January 2019. The Main Event was a joint effort between WPT and partypoker LIVE, with the two recently signing a 4-year partnership. One online starting flight was hosted on partypoker’s site and three live starting flights in Casino Sochi, Russia.

Ukrainian pro Denys Shafikov emerged victorious from the Main Event, also bagging the title of the first ever WPT Russia Champion. He beat a field of 503 entries (including 17 from the online flight) to secure his victory and the 1st place cash prize of $254,400 (~INR 1.81 Crores), which also includes the $15k WPT Tournament of Champions Ticket. He now has a chance to play in the WPT Tournament of Champions which will take place in Las Vegas later this year.The WPT Russia ME saw mostly Russian players participating in it, ensuring friendly banter all around.

Shafikov now has around $1 million in live cash earnings, making this win his 2nd best. His best live cash of $461,132 came in 2015 EPT Barcelona ME where he finished 4th. This WPT Russia win is Shafikov’s first ever title win, making it a special occasion for him, coinciding with WPT’s inauguration into Russia.

The penultimate day saw Shafikov build up a colossal stack, amassing over one-third of the chips in 9-handed play. In the final hand of the tournament, Shafikov was pitted against Russia’s Aleksey Gortikov. With 30 big blinds left, the latter shoved with Ac 7c but ran into Shafikov’s set of Nines on the turn and subsequently had to settle for the 2nd place cash prize of $179,660.

Shafikov after his win is now the newest member of exclusive WPT Champions Club and WPT President and CEO Adam Pliska even congratulated him in person after his win. He’ll be looking forward to representing Ukraine and will be putting up a tough fight in the WPT Tournament of Champions later this year.