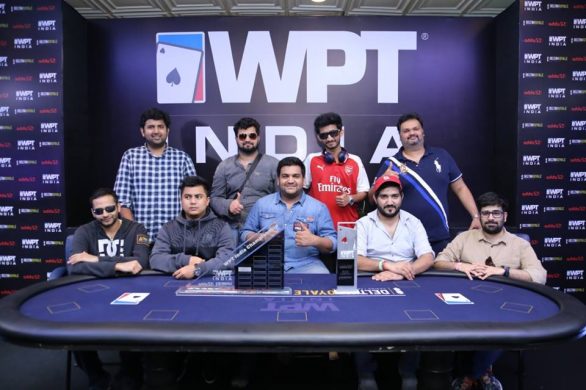 Everyone was excited about the World Poker Tour (WPT) coming to India for the second time and indeed, it has been a massive success so far. Apart from brilliant participation witnessed in the side events, we also saw a record-breaking Main Event taking place, with a total of 697 entries registering to the INR 55k Main Event. We’re now down to the 9-handed Final Table.

Yesterday was Day 2 of the Main Event and 241 players hit the tables after qualifying from the three starting flights. NJ Niranjan was the leader of Day 1A, Akshay Nasa led 88 players through Day 1B and the new addition of the Day 1C Turbo saw Anup Palod emerging as chip leader among 72 survivors.

The prizes were calculated with INR 66,35,000 up for grabs for the first-place player and a total of 88 players finishing in the money. Eliminations began place early on Day 2, with many of the short stacks shoving early on and it wasn’t long before we reached the money, with Jayjit Ray, BLT 3 Highroller champion, unfortunately going out on the money bubble, busting in 89th place.

Day 1C leader Anup Palod unfortunately couldn’t keep up the advantage yesterday and ended up exiting the tournament in 40th place for INR 1,53,000, when Rohit Mishra’s pocket Sevens beat Palod’s Kd 8d on a dry board. Nasa and Niranjan were the leaders of the other two starting flights and they maintained their dominance, being first and second respectively in the chip lead until Level 23, when the blinds were at 10,000/20,000-20,000.

However, Niranjan was sent to the rail too by Level 27, when his pocket Sixes didn’t hold up against Deepak Singh’s pocket Sevens. Niranjan walked out in 14th place for a handsome prize of INR 4,38,000, while Singh went on to become the eventual chip leader by the end of the day, leading the final 9 survivors. 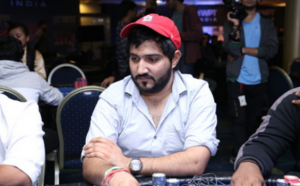 The last couple of eliminations that took place late last night were those of Rohit Mishra and Yuvraj Chaudhary. Deepak Singh had a superior stack and he executed a double KO with Ah Qc to knock out Mishra (8c 8s) and Chaudhary (Ac 10c) in 11th and 10th place respectively, as the board ran out Qd 7d 5s 2d 5d. Both players took away INR 5,49,000 for their efforts.

After this, the 9-handed Final Table was set and Singh took the chip lead with this Double KO. Play was halted for the night and these final 9 survivors will resume later today to play down to the ultimate champion. This player will not just take away a whopping first-place prize of IRN 66+ lakh but will also take away all the fame and glory, becoming WPT’s biggest winner in India.

Close behind Singh’s stack of 4.6 million is Adda52 Team Pro Amit Jain who also has a massive stack of 4.5 million chips. These two are ahead of the rest, as Sahil Mahboobani stands third going into Day 3, with a stack of 2.7 million. Day 1B chip leader Nasa is also in the mix, with 1.6 million in chips. Currently, Harsh Dembla is the shortest stacked with just about 4 BBs and he will probably be the first to head out on the final day, with the next pay-out at INR 6,63,976.

GutshotMagazine.com will be keeping a close eye on proceedings once it begins at the Deltin Royale in Goa, so stay tuned for all updates on the 2018 WPT India Main Event.