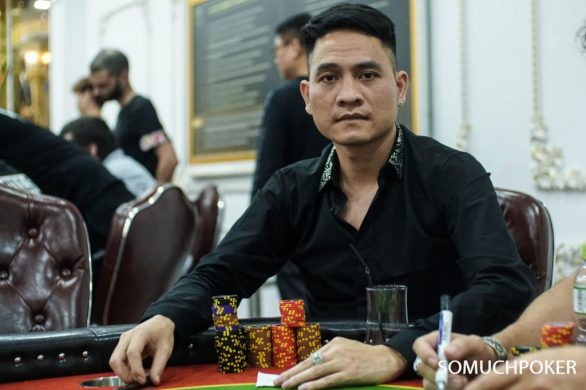 The Asia Poker League (APL) scheduled its latest live stop at the Pro Poker Club in Ho Chi Minh, Vietnam between 15-25 November. Apart from several other side events scheduled for the series, the APL Road Series Vol.3 Main Event is also taking place simultaneously, where three starting flights are now over.

The latest flight was played yesterday and a total of 179 entries registered to Day 1C, which was more than Day 1A and 1B combined, taking the Main Event total field up to 349 entries. With a buy-in of VND 16,500,000 (~INR 50,100), the VND 8 billion guaranteed prize pool seems all set to be passed, with Day 1D still to be played later today.

From this massive field that registered to play on Day 1C, only 47 managed to bag their chips at the end of the night to move forward to Day 2. Leading this pack was another local player in Vietnam’s Dang Van Hien, who is a known player in the Asian circuit with $85k+ in career live cashes.

Hien ended the 14 levels of play with 219,200 chips and the closest to him was Korea’s Alex Choi (Choi Young) who is second in the chip lead with 171,900 in chips. Another known Asian pro in the mix was Japan’s Tetsuya Tsuchikawa, who recently won the APT Vietnam Main Event last month, for the second largest cash of his live poker career.

So far, we haven’t seen a lot of Indian participation in the Main Event. However, there was Abhishek Paul who claimed one of the side events – Hyper Turbo 1. Hyper Turbo 2 will also be played later today, and we hope to see another Indian name pop up in this tournament.