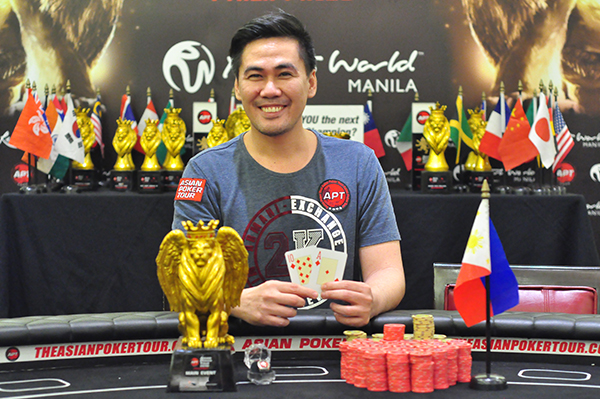 
The Asian Poker Tour (APT) is currently hosting a live poker tournament series in Resorts World Manila, where the 5-day APT Philippines Main Event has recently come to an end. After India’s Yasheel Doddanavar finished in 15th place, the final 8 players came back out on the fifth day to play down to a winner.

Holding the chip count on this FT was local boy Christopher Mateo who went on to ride the advantage and take down the Main Event which became his first-ever major poker title. It was also the biggest live cash of his career, bagging the top prize from the PHP 24,395,500 (~$470k) prize pool.

The final day just needed around 4 hours for a winner to be declared as Mateo took out quite a few players on the FT to win this tournament on home soil. With 503 entries participating, it was also the largest APT Philippines ME field wherein Mateo eventually struck a heads-up deal with Singapore’s Lu Zhenghao.

Zhenghao got the lead in heads-up for a very short while but Mateo hit back hard and even though the former got a couple of double ups, it wasn’t going to be enough. Mateo won the final hand with AdTd, having hit a pair of Aces to beat his opponent’s pair of Queens.

As per the ICM deal, Mateo took away the bigger portion of the prize pool, bagging PHP 4,376,000 while Zhenghao won PHP 4,100,000. They struck the deal as soon as heads-up began and took away nearly similar prizes with an added PHP 100,000 set aside for the winner. After bagging the title, Mateo also catapulted to the top of the APT Player of the Series Leaderboard.

The Main Event has also begun, with India’s Yasheel Doddanavar bagging one of the top stacks at the end of Day 1A. For all updates on APT Philippines and poker from around the world, keep following GutshotMagazine.com.