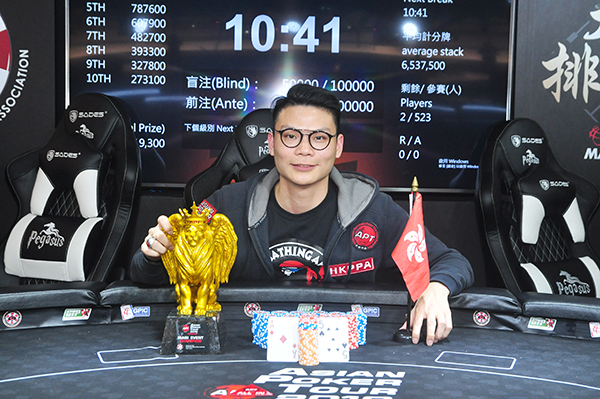 A total of 523 entries were made in the tournament and Day 3 was completed a couple days ago with James Jagger leading the whittled down field of 9. Trailing behind him were Chow Cliff and Co Chung Chuen with same number of chips. Yesterday, the Final Table of 9 played some fierce poker and Cliff eventually turned out to be the winner, taking home TWD 2,443,800 (~INR 56.52 Lakhs) as part of a deal between him and runner-up, Hong Kong’s Alan King Lun Lau. The latter earned the larger amount of TWD 2,800,000 (~INR 64.93 Lakhs).

Cliff eliminated 6 players out of the 9 on the final day yesterday. He reached heads-up with Lau, someone who sure must’ve given a tough fight. Jagger was eliminated first at 9th place by Cliff’s full house. Cliff then busted Wan Wei Han at 8th. Day 1A chip leader Li Min Jie was the next to fall by Cliff’s hands at 6th.

A hand in the heads-up battle between Lau and Cliff saw Lau announcing all-in on the board of 3c 7h Ks 8c, having made bottom pair with 3h 6h. Cliff also made Eights with 8d 5s and was good enough for him to call. The river of 9c didn’t matter and Cliff took a huge pot to himself. Lau managed to double up twice after this hand but the in the final hand, he went all-in with Ac 8h and Cliff called with Ad 5s. The board spread 5d 10s Qd 9s 4s and Cliff took the title and the trophy with a 5-pair.

Cliff reacted after his win saying, “It’s a dream winning this event! I’ve played tournaments for years, but this is my biggest score. I made many mistakes so I’m lucky. Coming into heads up against King Lun, you don’t expect to win.” When asked about his call with Eight-five mid-pair in heads-up, he said, “it was a fish call, I’m a fish.”

Cliff doesn’t have much in live cashes till now, but this addition will prove to be a major boost to this bankroll, and he’ll be hoping to convert it into plenty more cashes in coming time, especially since 2019 is packed with adrenaline rushing tournaments and series all over the world.

Keep reading GutshotMagazine.com for more 2019 APT Taiwan updates as well as other tournaments from around the world.