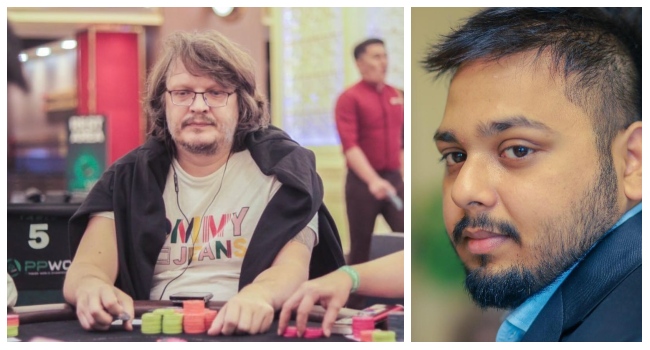 
PPPoker, one of the up and coming poker companies in the Asian region, having already been established in the mobile arena, has been upping their game in the live scene with the PPWC or PPPoker World Championship 2019. The series began on 15th Feb and will be in the books by 21st February 2019.

While Team Thailand won the first 2019 PPWC tournament, the Teams Event, it was time to host the Main Event PHP 20 million GTD. A total of three starting flights were hosted till yesterday in the ME with India’s Abhinav Iyer emerging as the chip leader on the first starting flight itself.

Yesterday’s Day 1C saw 176 players signing up to the event. The field eventually whittled down to 62, who will enter today in Day 2. Leading the pack in chip counts is Russia’s Denis Cheremisin with 209,300 chips. Trailing behind him is UK’s Gabriel Carter and Philippines’ Angel Kabigting at 2nd and 3rd respectively. Cheremisin resides in India’s poker hotspot, Goa, and has a few live cashes to his name since 2012. His biggest was also his first recorded live cash of €26k at the EPT Deauville 2012 ME.

Sajal Gupta, known Indian pro, was also in the mix on Day 1C, after missing out on Day 1B. He got busted again, this time by Cheremisin at the end of Level 7 when the latter won the pot with an Ace-to-Ten straight, beating Gupta’s Ah. This saw Cheremisin boosting his chip stack considerably. He was shifted to a new table after this pot and won multiple hands there too.

Rishab Jain is another Indian pro to enter the Day 2 race. Jain is 43rd in chip counts and has bagged 48,300 chips at the end of Day 1C. He is the 6th Indian in the ME race to have qualified for Day 2 after Iyer, Kalyan Chakravarthy, Aditya Sushant, Jasven Saigal (all from Day 1A) and Rajeev Kanjani (from Day 1B).

Rishab Jain, the only Indian to progress from the last flight, has a respectable record in online/live felts. He is a winner of multiple online titles from all leading Indian platforms. He has even won a Mercedes and a Ducati just on Spartan promotions. Coming to live, he has played in many international series, including the poker capital, Las Vegas.

The final 62 qualifiers from the last starting flight will join 22 players from Day 1A and 46 from Day 1B and the total field of 130 players will start playing at 12 pm local time today, i.e. 19th February, so keep checking GutshotMagazine.com for first updates on this as well as for other poker news coming from all four corners of the world.