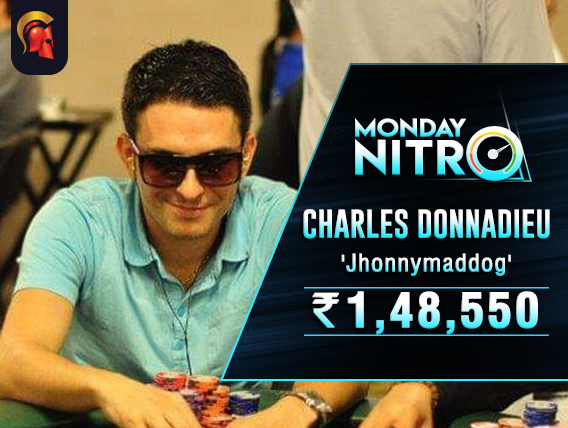 
Monday Nitro INR 8 Lakhs GTD is an offering that recently was introduced as a feature tournament by Spartan Poker. The company is known to offer some of the best and innovative promotions/tournaments in the Indian online poker scenario. Mondays on Spartan previously had the Mega Freeze hosted which is now replaced by the above tournament.

Overcoming the field and topping it was Charles Donnadieu aka ‘Jhonnymaddog’. He earned INR 1,48,550 as the higher amount out of the heads-up deal he made with his opponent ‘Veer’ who earned a similar amount of INR 1,48,249. Rounding up top 3 was Gaurav Sood aka ‘mozzie17’ who took home INR 82,320 as the runner-up pay-out.

Donnadieu is a regular player on virtual felts and won this tournament after a great comeback, which nobody would’ve expected. We talked to him after his win and he said, “There were 13 players left and I only had less than 3,000 chips to play with when the average stack was more than 250k. I subsequently bagged some good hands to finish in the tournament. That was amazing.”