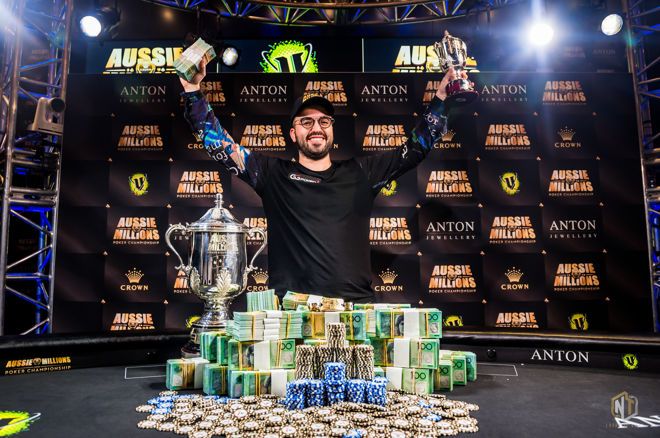 Bryn Kenney is the 2019 Aussie Millions ME Champion

The largest series in the southern hemisphere, the 2019 Aussie Millions, recently announced its Main Event champion. The AUD 10,300 Main Event of the series attracted a record 822 entries overall, and the field whittled down to final 7 who competed against each other for the glory that comes with the title, ANTON ring and the cash prize. Four Indians had participated in it among whom India’s first WSOP bracelet winner Aditya Sushant earned a pay-out at 87th.

Kenney told the press later about this deal, “I said that I wasn’t interested in a deal unless I was going to win. If we were going to play to win, then I’m happy to play to win. But if I’m going to make a deal then I feel like the tournament is sort of over. They were big pay jumps; I’ve played for this much before, but this must have been the biggest pay jump that they’ve both ever been involved in.”

In the final 3-way that happened, the eventual champion Kenney scored a double through Del Vecchio some time into the gameplay. Kenney said, “Three-handed you start feeling more emotions. You don’t wanna come in third once the pay jumps start to get really big.”

Kenney now has over $26 million in total live earnings till now. Originally from New York, Kenney is somewhat of a celebrity worldwide, ranking 7th in USA’s All Time Money List and 9th throughout the world. He earned his biggest live cash at 2017 PokerStars Championship Monte Carlo SHR finishing 1st for $1,946,911. Among his latest wins was at the 2018 EPT Monte Carlo again for shipping the SHR. He is a WSOP bracelet winner, having earned it back in 2014.

He lastly said, “I’ve had bigger wins than this. But it’s amazing to do it in this city. I’ve been having a good time with these people. It’s by far the most I’ve ever been asked to take a picture. It’s the best tournament stop in the world. During the summer here you just walk outside on break and it’s just nice here. I don’t have a complaint about it so I’d recommend anyone to come here next year – every year! It’s just a great stop!”

Keep reading GutshotMagazine.com for more such international tournament results and for general poker news from around the world.