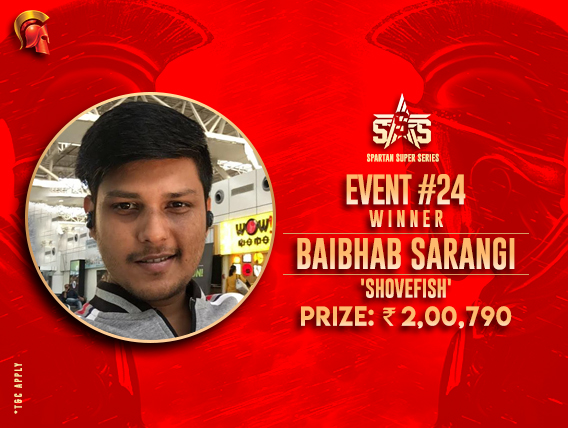 Yesterday was the final day of the November edition of the Spartan Super Series (SSS), with a total of 5 tournaments scheduled to be played. Of course, the Main Event was always going to be the most talked about on the day, but there were plenty of other tournaments also lined up for the day.

Kartik Ved was the eventual winner of the prestigious Main Event, but another high-value tournament that took place was SSS Event #24 PLO INR 8 Lakh GTD, which had a buy-in of INR 3,300 and attracted a total field of 290 entries. This was one of the few PLO tournaments in the series and yesterday, Baibhab Sarangi aka ‘shovefish’ emerged victorious. He won INR 2,00,790 for shipping the tournament.

The prize pool was inflated to INR 8.73 lakh last night and the top 24 players from this field were paid out a minimum of INR 8,730. Sarangi had to wade through a tough field to take down the title, but he was determined. Eventually, he got there when he beat ‘Leveluno’ in heads-up, who collected INR 1,34,878 for finishing second.

When Gutshot caught up with Sarangi regarding this win, he said, “I find PLO tournaments a little easier than the NLH ones because of my experience of playing PLO cash games (online and live) for a very long time. It goes without saying that it always feels food to secure 1st position but the experience of playing in Spartan is inimitable. The field was not an easy one. Their skill level in poker is not the highest yet, but that’s cool and also challenging at the same time. It’s a common notion that we play PLO to gamble but mark my words, it involves a lot more skill and calculation. So, I would say choose your cards and spots wisely.”

Here’s a look at the other side events that were played on SSS Day 5:

With a buy-in of INR 550, the first tournament of the day began, and it attracted a total of 186 entries. The prize pool was eventually shared among the top 24 players with a min-cash of INR 2,000 but the player who went on to score the biggest was ‘Ch0pUrNutZZ’ who has had plenty of online victories on Spartan in the past. Here, he was handed a pay-check of INR 46,000 for his efforts, following his heads-up battle against ‘ravenclaw410’ who took home INR 30,900 for finishing second. The final hand was a pre-flop all-in where a pair of Nines turned out to be better than a pair of Sixes.

The buy-in (INR 880) and the prize pool (INR 2.5 lakh) were both higher for the second tournament of the day and here, we had Pranjal Gandhi aka ‘lilmessipranjal’ emerging victorious. This is a player who has a lot of wins on Spartan in recent times, having won an SSS title in the last edition too, while also winning The Bout on PokerBaazi very recently. Last night, he won this tournament for INR 59,897 to go with another SSS title after he beat ’tilt_master’ in heads-up, who collected INR 40,328 for finishing second.

This tournament marked the end of the SSS series, being the 26th and final tournament of this edition. It had an entry of INR 1,100 and a total of 206 entries paid this buy-in to participate and from them, only 25 were paid out with the min-cash set at INR 2,100. The tournament was shipped by ‘chessplayer’ who would’ve ended his series on a high on Spartan taking away INR 92,750 in prize money. In heads-up, he beat ‘vinay09’ who settled for the runner-up prize of INR 56,875.

For more updates on the biggest and best online poker tournaments in India, keep reading GutshotMagazine.com.