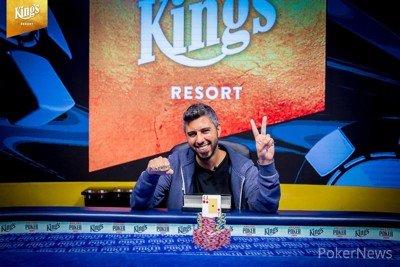 The World Series of Poker (WSOP) began its annual trip to Europe a few days back and after a long drawn out COLOSSUS Event to start the series, we’re now moving on at a quicker pace. After Tamir Segal was presented the first gold bracelet of the series, we now have our second event winner.

Event #2: €1,650 No-Limit Hold’em 6-Handed Deepstack was a 3-day tournament that attracted a total field of 221 entries and from among these, Israel’s Asi Moshe was declared the winner. We now have winners of two tournaments declared so far at the Kings Casino in Rozvadov, both from Israel. He commented on this after the victory, saying, “The secret of Israel? I have no idea, but two for two is pretty sick. Sick is an overused word in poker, but it is sick!”

Moshe collected the top prize of €82,280 (~INR 69.89 lakh) after winning this tournament, while also being awarded the second WSOP gold bracelet of his career. His first bracelet came four years back at the WSOP in Las Vegas, where he shipped a $1,500 NLHE tournament for $582,321.

In this tournament in Rozvadov, 34 players were paid out a minimum cash prize of €2,371 and on Day 3, the final 6 came out to battle for the top place. True to the spirit of the WSOP, all 6 belonged to different countries of the world. Moshe beat Germany’s Robert Schulz in heads-up, who settled for the runner up prize of €50,842.

Quite a few more tournaments are to be played as part of the 2018 WSOP Europe schedule and you can get timely updates on all of them here on GutshotMagazine.com.