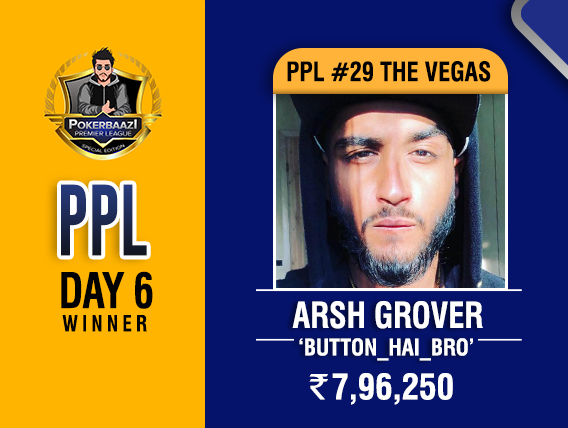 Yesterday saw another set of 5 tournaments wrapping up Day 6 of PokerBaazi Premier League (PPL) hosted by PokerBaazi. The series is offering 7+ Crores as guaranteed prize money attracting a massive field of 2,200+ entries the previous night and witnessing another incredible success in the tournament. Following is a complete summary of the events…

The first tournament of the day itself began with a favorable number 194 unique players with a buy-in of INR 1,000. The event crowned Suhas N aka ‘skullkiker’ as winner who took home INR 72,676 as the first-place prize money.

The event took off at 7:00 pm yesterday with a buy-in of INR 11,000 and saw a moderate field of 310 entries (including, 152 re-entries). Only a small chunk of top 36 players received a minimum amount of INR 21,080. The winner of the evening was online poker pro Wilson Yomso under the name ‘kalingkaling’ walking out successfully with a grand sum of INR 6,84,790. He beat ‘dewdrops’ in the heads-up battle. The runner-up managed to take home INR 4,80,500.

The biggest tournament of the day was The Vegas guaranteeing a massive amount of 40 Lakhs and attracting a huge number of 910 entries (including 395 entries) for a buy-in of INR 5,500. A prize pool of INR 45,50,000 was drawn which was shared among the top 108 places receiving a minimum amount INR 7,735. The winner of yesterday’s late-night tournament was Arsh Grover aka ‘Button_Hai_Bro’ bagging an enormous INR 7,96,250 in prize money. He beat ‘dewdrops’ who rested in second place with INR 5,57,830.

PPL Day 7 is coming back in action today (26th September) at 4 pm with the highlight event of the day being HighRoller INR 70 Lakhs GTD for a buy-in of INR 25,000. For latest updates on poker news around the world keep following GutshotMagazine.com and stay tuned!