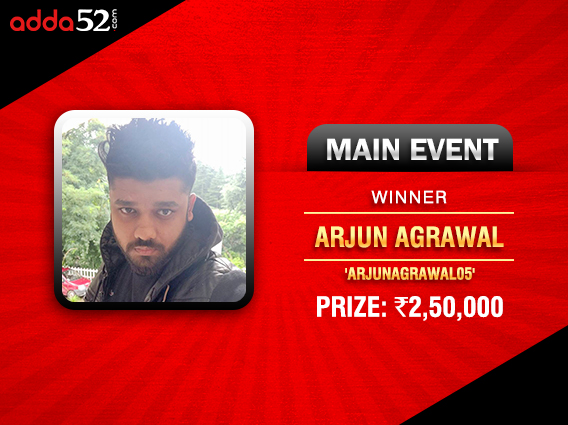 There’s plenty of poker happening all around us, with all the top poker companies hosting tournaments, leaderboards and series of their own, while there also happens to be a lot of live poker taking place, with India’s Dhawal Lachhwani making a very deep run in the ongoing WSOPE Monster Stack Event.

One series that recently ended online was the Chip Up series on Adda52, which promised over INR 45 lakh in guaranteed prizes through the week that ended yesterday, 21 October. One of the highlights of the series was the Main Event and that was scheduled for yesterday too.

The specialty of the series is being able to chip up considerably without having to bother about high buy-ins. Basically, lower buy-ins and bigger prize pools. The Main Event started at 7pm yesterday evening, costing players a buy-in of INR 999 and eventually, a field of 690 entries registered to this tournament.

Such kind of tournaments present an opportunity to many of the lesser known players as the best pros would’ve had their eyes on the bigger tournaments of the night. However, the player who won it has won online tournaments in the past, including finishing third in Uma Poker’s inaugural LaunchPad tournament that was played in August.

The player is Arjun Agrawal who plays under the name ‘arjunagrawal05’ on Adda52. Yesterday was a pleasing day for him as he outlasted all the entries in this Main Event to win the top prize of INR 2,50,000, while also cashing out in the Mega Suits Event that was won by Apratim Sharma.

The tournament came to an end at 2:51am this morning after Agrawal hit the final nail in the coffin, beating ‘chirandh’ in heads-up and the latter walking away with the runner up prize of INR 1,45,000. It was another successful edition of the Chip Up series on Adda52 and we look forward to the next series too. Until then, keep reading GutshotMagazine.com for more poker updates from around the world.