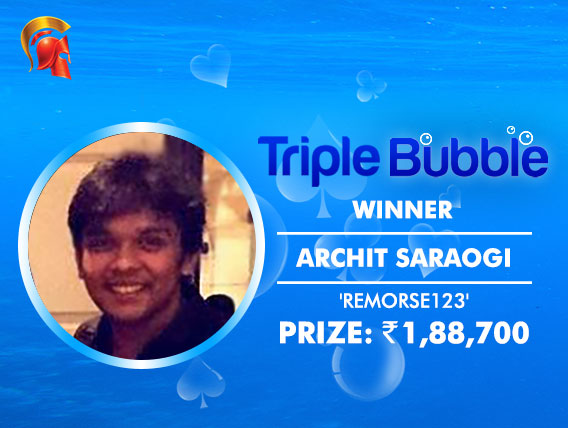 
Winning an online poker tournament in India is something that takes a lot of skill, especially when playing on The Spartan Poker, which sees some of India’s top players taking part each day. This is even more true when it comes to daily featured tournaments, which involve the biggest prize pools daily.

Yesterday being a Friday, we saw two high-value tournaments taking place in the form of The Elite and Triple Bubble. While Elite is one that has a much higher buy-in, Triple Bubble INR 7.5 Lakhs GTD has a buy-in of INR 3,300 wherein there are a total of three prize bubbles – money bubble, FT bubble and tournament winner bubble.

Yesterday’s Triple Bubble kicked off at its usual time of 7:30 pm and we saw regular online grinder Archit Saraogi aka ‘ReMorse123‘ ending victorious, beating a tough field of 204 entries (including 21 re-entries and 79 re-buys) to take away top honours on the night. He took home INR 1,88,700 for his finish and the title, beating ‘Fish2050’ in heads-up.

The final hand of the tournament saw Saraogi already with an overwhelming chip lead. His opponent was packing 5s 7s and shoved pre-flop. Saraogi called with 3d As. The board ran Ks Ts 9c 8h Kd and Saraogi won with a higher kicker Ace and collected the entire pot.

The player is quite a known entity in the circle and has many title wins to his name on Spartan and other platforms, but the Triple Bubble win has put a welcome addition in his bankroll and he’ll be looking forward to continue this winning trend further in the year, with many exciting and action-packed tournaments in line.

We spoke to Saraogi after his win and he had this to say about it. “It was a tough FInal Table yesterday. I got lucky in a few spots and eventually entered 3-way with the least stack. In heads-up, I was with 1:2 chip deficit and felt like an underdog, but I played my best game and finally brought the title home.‘

Since it is a feature tournament, the field was filled with many pros and regs. Some of them ranked in the top 17 paid places too, for a min-cash of INR 11,775. Keep reading GutshotMagazine.com for similar tournament round-ups as well as for general poker news from around the world.