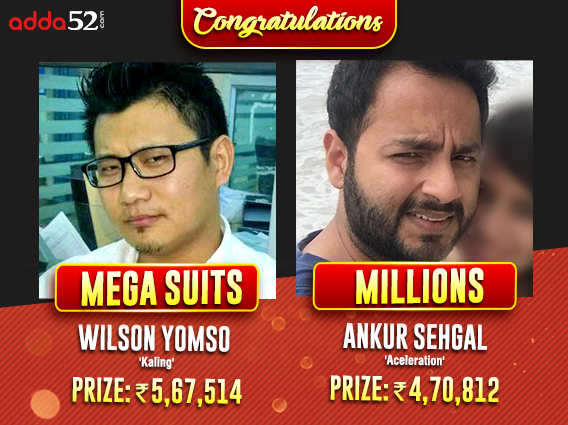 Another Sunday has come and gone and another day to win big on Adda52 and other major online poker platforms. Being a common holiday for most of the country, the participation is always highest on Sundays and that’s why most companies prefer to hold their high-value tournaments on Sunday.

Mega Suits and Millions were hosted once again and after hours of grinding on the virtual felts, we finally had a winner in each tournament. They were the known names of Ankur Sehgal and Wilson Yomso, both of whom aren’t new to winning major signature tournaments online. Keep reading for a complete summary of the same…

Wilson Yomso plays as ‘Kaling’ on Adda52 and he’s a regular winner there too. Paying a buy-in of INR 5,500, Yomso was among the 472 entries that signed up to play yesterday, beginning at 5pm and ending today morning at 1:39am. INR 13,750 was the calculated minimum cash that would go out to the top 49 players in the tournament.

However, Yomso wasn’t interested in the smaller prizes on offer. He outlasted the field and bagged the top prize of INR 5,67,514 after beating Anujkumar Kodam aka ‘thekinganuj’ in heads-up. He won INR 4,07,486 for finishing second and he wouldn’t be too disappointed with that result either.

Yomso has plenty of poker victories across all major websites but this was the first time he laid his hands on the Mega Suits title. Talking to Gutshot after this win, he said, “It’s my first Mega Suits victory. I’m feeling really good about shipping such a prestigious tourney on Adda52.”

After making a deep run in Mega Suits, Ankur Sehgal aka ‘Aceleration’ went a few steps further last night to win the other signature tournament called Adda52 Millions. Played in the popular 6-Max format, 191 entries each paid the INR 11,000 buy-in which slightly missed the guarantee and eventually, the top 19 players were paid out INR 20,000 each, which is nearly double the initial buy-in.

Only some of the best can be confident of paying such a high entry and there were some really talented poker players finishing in the money. Some of them included Mega Suits winner Wilson Yomso (19th), Sahil Mahboobani (9th), Rajat Sharma (6th), Siddarth Singhvi (4th), and Kanishka Samant (3rd).

In heads-up, Sehgal was up against ‘shabbaking’ and the two knew that there were major pay jumps involved, so they soon decided to cut a deal in heads-up which saw Sehgal taking away the bigger prize of INR 4,70,812. As for shabbaking, he settled for the runner-up prize of INR 4,25,188 as the tournament ended at 3:59am this morning.

Talking about the victory, Sehgal told Gutshot, “It feels amazing to take it down Adda52 Millions for the third time… I feel at home with the deep structure and 6-max format, which I guess is why I’m consistent in this tournament.” Sehgal last won Millions on 28th April, following his first Millions title in December 2018.

For all updates on the biggest poker tournaments in India, keep following GutshotMagazine.com.