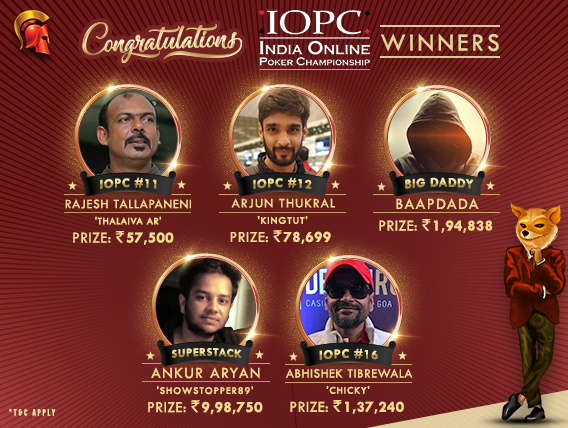 
The Spartan Poker is currently hosting their highly anticipated India Online Poker Championship (IOPC) and yesterday, being a Sunday, saw a total of 6 events being hosted as part of IOPC. The biggest of them was The Millionaire which had INR 1 Crore GTD and was won by Joey Saha. Along with that, there were a couple of high stakes events hosted as follows.

The first event of the day was a high return tournament, the INR 2.5 Lakhs GTD NLHE, for a buy-in of only INR 550. The total attracted entry field came to 288 entries and crossed the guarantee too.  Out of the top 36 places paid for a min-cash of INR 1,869, known player Rajesh Tallapaneni aka ‘THALAIVA AR’ shipped this event for INR 57,500. The runner-up was pro Kartik Ved aka ‘TheInternetKid’, who took home INR 40,250 for his finish.

Tallapaneni has quite a record online, especially on Spartan, where he finished top in two leaderboards both in the last month itself. He topped the Lightning Leaderboard for INR 4 Lakhs and then went on to top The Weekly Leaderboard (TLB) later. He is a very dedicated poker player and is consistent in ranking in the tops in most of the tournaments, as is indicated by his leaderboard wins.

The final hand of the tournament saw Tallapaneni with over 3:1 chip lead. Ved went all-in pre-flop with 6s Qs and Tallapeneni called with Ts As. The board of Qh Ac 3c Th 8c gave two pairs to the eventual champion against Ved’s Queen-pair, and Tallapaneni shipped the first tournament of the day.

The second event of the day pulled a 358-entry field. The INR 4 Lakhs GTD NLHE crossed the guarantee again and created INR 4,25,400 in prize money. The INR 660 buy-in tournament saw top 54 places being paid for a min-cash of INR 1,914. The winner to emerge from this event was Arjun Thukral aka ‘Kingtut’ who took home INR 78,699 as 1st place cash prize.

Thukral beat ‘Vishalb22’ in heads-up to bag his title and the prize. The runner-up earned INR 56,791 for his finish. The final hand was played at Level 38 with blinds at 25K/50K/5K (ante) and saw an all-in pre-flop situation here too. Thukral was the one to shove in with pocket Nines and his opponent called with 6s Ah. The board revealed 5h 4h Jc 5d 8c and Thukral and won with two pairs against his opponent’s one pair.

We got in touch with him after his win and he had this to say “I have three years poker experience both live and online and a PhD in Finance so that has helped. I ran good towards the end yesterday and won important flips so that boosted my stack.” This win is surely a morale booster for him and help him sign up for more upcoming tournaments.

The Big Daddy INR 10 Lakhs GTD is a tournament that is among the tournaments hosted every Sunday on Spartan. It was inaugurated back in 2018 when the Spartan acquired the poker room in Big Daddy Casino in Goa. The tournament also gives INR 30K Goa package to the winner to play in Spartan’s Big Daddy room.

The final hand of this too was an all-in pre-flop situation and an interesting one at that. baapdada shoved his stack in with a little over 2:1 chip lead with pocket Tens. It was interesting because Sharma was with pocket Nines and he called. The board of 4d 7s 6c 3h 8s didn’t matter and baapdada won with the higher pair.

The Final Table itself saw a few regulars vying for the top prize. Siddharth Singhvi aka ‘PeterPunter’ finished 3rd in the tournament for INR 87,200. Siddharth Karia aka ‘schemer77’ finished next at 4th for INR 69,760. Rajesh Shukla aka ‘macchi_fry’ was also in the FT and finished 8th for INR 28,285.

After the Millionaire, which was won by Joey Saha for INR 25 Lakhs, the next in line was the 15th event of IOPC, SuperStack INR 30 Lakhs GTD. This too, broke the guarantee by a colossal margin. The total entry field came to 799 entries including 133 re-entries and 276 re-buys and the prize pool created was INR 39,95,000.

The winner to emerge from the grind of almost 10 hours in the tournament was Ankur Aryan aka ‘showstopper89’, taking home INR 9,98,750 for his 1st place finish. He beat ‘Yopat92’ for the 1st place finish. The runner-up also took a wholesome INR 5,99,250 for his finish.

Aryan has played plenty of online tournaments in the past and has shipped a few too. He even won the Super High Roller event in July 2018’s IOPC for almost INR 19 Lakhs. He’ll be looking to play a few more tournaments with this welcome addition to his bankroll, and IOPC, with such a staggering guarantee, won’t fail him.

The last tournament for the day in IOPC was won by Abhishek Tibrewala aka ‘chicky’, a known player in the Indian circuit. He beat a field of 439 entries to bag his title, taking home INR 1,37,240 in cash prize. He beat ‘TamilSuperKing’ in heads-up to ship the tournament, who had to settle for INR 99,640.

The last hand of the tournament was played at Level 46 with blinds at 89K.169K/16K (ante). TamilSuperKing went all in before the flop with Ks 5s. Tibrewala called the bet with Jc Jd. The board came to 6h Ad Kd Jh 9h, making Jack-trips for the eventual winner and beating TamilSuperKing’s King-pair.

We got in touch with Tibrewala after his victory and he had this to say about it, “I’m too overwhelmed by the win. I’ve been trying to play some good poker and ducking some back beats along the way. I hope to achieve a remarkable feat in the process in coming days.”

Tibrewala had recently shipped a title in the Spartan Super Series last month for almost INR 3.5 Lakhs. He also plays live and has a couple of recorded cashes too. The recent 2018 WPT India saw him finishing in the Big Bounty event at 32nd place for INR 25K, which was ultimately shipped by Alok Birewar.

The IOPC has a lot in store for till 20th January, so stay tuned to GutshotMagazine.com to get the first IOPC update and results, as well as for general poker news from around the world.