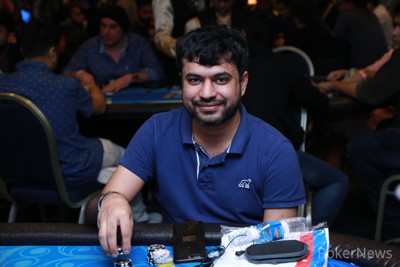 
The luxurious Deltin Royale Casino in Goa is home to the Deltin Poker Tournament and yesterday, we began another series on board this ship in Goa’s Mandovi river. The first day saw the customary DPT INR 15k Deep Dive kicking off – a 9-max tournament with each player allowed 2 re-entries each. The defending champion is none other than Jasven Saigal.

Nine 25-minute levels were to be played before registration shut and by this time, a number of familiar faces were seen at the tables, including Adda52 Pro Kunal Patni, Meherzad Munsaf, Adda52 Celebrity Pro Minissha Lamba, Maria Kirloskar, Anant Purohit, Pranay Chawla, Zarvan Tumboli, Dhaval Mudgal, and many others.

Day 1 of the ongoing DPT ended when we arrived at the Final Table of 9 players in the 15k Deep Dive tournament. Leading the pack is Ankit Kapoor with a massive stack of 865,000 chips. He is followed by none other than Adda52 Pro and first Indian female WSOP bracelet winner Nikita Luther, who sits pretty with 760,000 chips.

There are quite a few known names on the Final Table, including Arjun Agrawal, who is third in chips with 7,40,000. Agrawal is a known grinder, with several victories online as well as live. He is joined by Rubin Labroo who has 370k in chips. This guy needs no introduction, known very well across the industry for his huge collection of wins especially over the last one year. 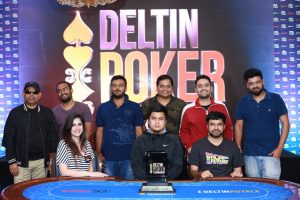 187 entries were recorded in all. From these, the tournament organizers decided to pay the top 18 players with a minimum cash prize of INR 35,000, which was more than double the entry fee. The top prize set aside for the eventual winner was locked in at a handsome amount of INR 6,80,000.

Among some of the known names to bust in the money were Shardul Parthasarathi (14th for INR 40,000) and Mihir Thakkar (13th for INR 40,000). They were soon followed by Akash Kakkad, who busted in 10th place for INR 60k which also halted proceedings at DPT Feb 2019 Day 1.

The pay-outs will continue at 9th place on the FT when Day 2 kicks off later today, but everyone will only have their eyes on that top prize of INR 6.8 Lakh. Currently, Luther, Agrawal and Kapoor have put themselves in a good position to take home this top prize, but there is a lot of talent sitting on this table.

The Final Table resumes today at the Deltin Royale at 2pm, and we’re expecting some intense poker between these nine players. Keep reading GutshotMagazine.com for all updates on this tournament and other tournaments from the ongoing DPT Feb 2019.