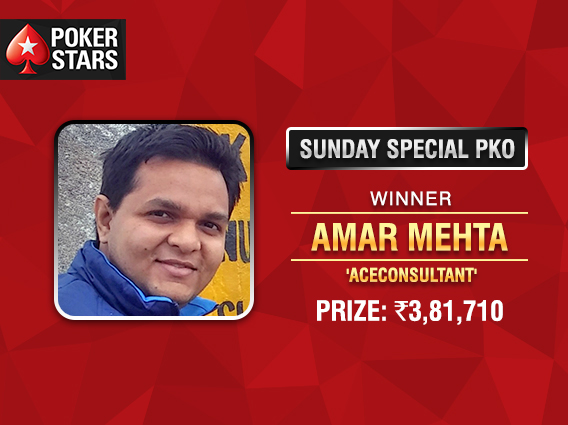 
Yesterday being a Sunday, all the leading poker platforms in India hosted some of its biggest guarantee tournaments for the week. Among them included the nascent PokerStars India, the Indian branch of the worldwide leading poker brand.

PokerStars India’s Sunday feature tournament is the Sunday Special PKO INR 20 Lakhs GTD. The tournament, for a buy-in of INR 5.5k (half of this amount is the starting bounty), attracted a total playing field of 319 entries (including 110 re-entries) yesterday. The top 53 places were paid for a min-cash of INR 7,639.

Topping the field and taking home a massive total of INR 3,81,710 after a long haul of over 8 hours (7 pm to 3.13 am today morning) was acclaimed online grinder Amar Mehta aka ‘AceConsultant’. He played some phenomenal poker to ship this popular title, beating Rubin Labroo aka ‘kornkid4’ in heads-up, who earned INR 2,31,017 as his cash prize (bounty included).

Mehta, the champion, is a renowned online player and has cashes from a lot of previous online tournaments. He shipped 9stacks Sunday Stacks last November, which saw him add a significant amount to his bankroll. He also won PokerBaazi PPL title last October for over INR 2.5 Lakhs. This win is his first ever Sunday Special title and he’ll be looking forward to winning some more on the platform in coming months.

Gutshot contacted Mehta after his win and he had this to say about the tournament, “Bounty tournaments are always fun because the different strategies players use get factored in the bounty also. I made some consistent runs in this tournament over the last 2 months and hence knew that a top 3 finish was going to come soon. Coming first was an icing on the cake after a good HU battle with Rubin [Labroo] who is an amazing player.”

About his gameplay last night, he elaborated saying, “I was short for the first 4 hours of the tournament and chipped up quite a bit when there were 30 remaining. Action slowed down during the final 2 tables and I had to be patient and look for the right spots. I also looked up all my opponents on Sharkscope to find out the people I need to exploit and others who I need to be careful about. I entered the final table 4th out of 9 and knew had to play a waiting game keeping ICM in mind. I picked up some good spots where I got value on my hands and some where my bluffs went through. I was confident of closing this tournament on a high note and was glad that I could.”

The Final Table of the tournament was tough as Mehta was pitted against Labroo in heads-up and another one of the veterans of the community Shravan Chhabria aka ‘lukBo$$13’ finished 5th on the FT for INR 71,767 including bounties. Stay tuned to GutshotMagazine.com for more upcoming tournament results from PokerStars India as well as other sites.