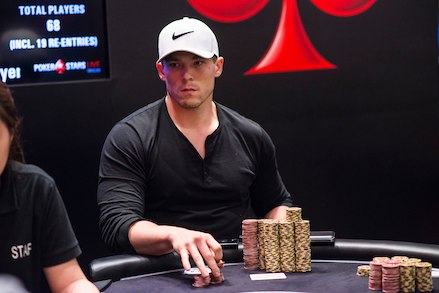 
The 2018 Macau APPT (Asia Pacific Poker Tour) kicked off on 14th March and we have already reported a couple of tournament results. Ho Lun Pang won the opening event while Kristen Bicknell won Event #2 – APPT National High Roller. Now, the Super High Roller has come to an end and USA’s Alex Foxen has shipped this tournament.

Foxen was up against China’s Shan Huang in heads up of this HKD 400k buy-in tournament, which recorded a total of 68 entries (9 re-entries) and created a massive prizepool of over HKD 25 million. These two did brilliantly to get through some of the top high stakes pros from around the world, and now they had to just fight for the trophy, title and the whopping prize amount of HKD 7,560,000 (~US$963,987) for first place.

Going in to heads up, Huang held the chip advantage, with 10.04 million chips as compared to 6.96 million of Foxen’s, but the latter did well to recover. There weren’t any major pots but Foxen’s aggression was helping him chip away Huang’s stack. It finally came to an end when players went all-in, with Foxen holding A-6 and Huang holding K-Q. The flop gave Huang nothing with 5-10-8, but the turn J gave him chances of a straight. However, the river opened 7 and Foxen was crowned champion with Ace-high!

Before today, Huang had a total of nearly $550k in live poker tournament earnings, while Foxen, with experience of playing all over the world, had over $2.6 million in live cashes. Foxen came into the final day of the SHR event with a huge chip lead over the rest, having over 7 million chips, while the next best was below 2 million chips.

This eventually became Foxen’s second biggest live poker win, following the $1,134,202 he earned for a second-place finish at a WPT Main Event in December last year. With this victory, he has now taken his career winnings past the $3.5 million mark. For Huang, it was the biggest win of his career!

The 2018 APPT Macau Main Event has also begun and after 5 levels, more than 160 entries have been recorded. Keep reading GutshotMagazine.com for updates on this event.