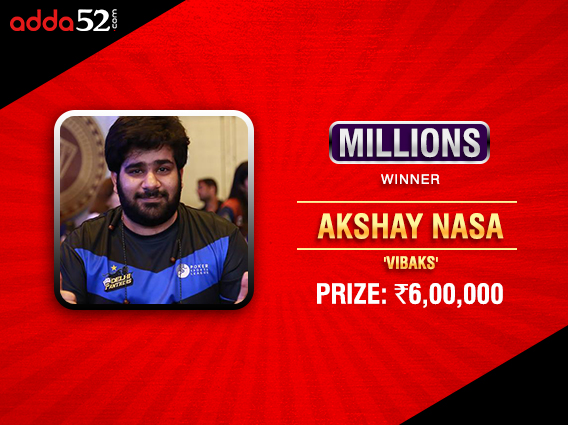 
Akshay Nasa is never too far away from big online poker wins. The 24-year old is a regular across all the major platforms and is always a top contender when it comes to the biggest tournaments. While scrolling through the top Indian tournaments each morning, you’re bound to see his name among the money finishes.

Yesterday, he enrolled himself in the Adda52 Millions 6-Max INR 20 lakh GTD tournament on Adda52, which is something they host each Sunday at 8pm. It was a long grind which ended today morning at 4:20am and Nasa emerged victorious beating a very tough field, as it always is in this tournament.

Playing under the name ‘vibaks’ on Adda52, Nasa for healthily awarded for this victory, taking away INR 6 lakh for first-place, after Adda52 decided to drop their INR 7.5 lakh GTD top prize that we’re so used to seeing over the months. He ended a brilliant month of September, having earlier shipped the Sunday SuperStack on Spartan and the BSS MegaStack on PokerBaazi on his birthday.

Let’s just give you an idea of how tough this field must’ve been. Nasa had to get past ‘bluffme19’ in heads-up who is none other than popular pro Sahil Chutani, who also took away a handsome prize of INR 3,45,000. The INR 11,000 buy-in turned out to be an extremely good investment for both these players.

In third place was ‘King0fMerge’ who has also won a few titles on Adda52 in the past. This player took away INR 2.6 lakh while Abhishek Garg aka ‘thegrinder’ who won INR 2 lakh for finishing fourth. In fifth was another top player in Goonjan Mall aka ‘gmtesting’ and he added INR 1.5 lakh to his poker bankroll.

We had a word with Nasa after this big victory. He said, “It was probably the toughest Final Table I have ever played. I was really unhappy with the way I played a few spots in the final 4. I came down to 4/4 from 1/4 and won crucial flips to luckbox to the victory. I feel very lucky to win this tournament even after messing up so many spots.”