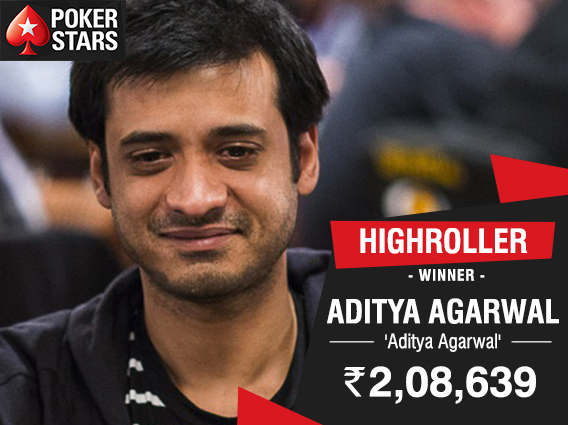 
Aditya Agarwal is a well-respected player of the poker community in India. He is looked up to by thousands of Indian poker players who aspire to play at the highest level. A well regarded player of the Indian poker community, Agarwal has put in significant performances at regional and global felts racking up a multitude of cashes and an impressive number of title wins. Just last month, he won PokerStars India Highroller and it didn’t come as a surprise when he did it again last night.

The Thursday feature PokerStars India Highroller INR 12 Lakhs GTD tournament was hosted yesterday on the platform at 8 pm in the evening. The tournament attracted a total of 182 entries (including 76 re-entries) for a buy-in of INR 7,700. The total prize pool crossed the guarantee and reached INR 12.74 Lakhs.

Agarwal, playing under ‘Aditya Agarwal’ with the red spade logo besides his name since he’s PokerStars Pro, shipped the tournament after a grind of over 7 hours, ending at 3.09 am today morning. He earned INR 2,08,639 after a heads-up deal with Vivek Singh ‘Mystic Peaks’. The latter bagged INR 2,33,482 as his part of the deal, a higher amount but one which didn’t come with the title.

Agarwal has been in the community for a long time and can easily be called a veteran. He is a top pro on Indian felts and internationally as well. He is currently 3rd in India’s All Time Money List and has over $1 million in live cashes. He earned his best live score of $242,211 in 2018 APPT Macau Main Event at 2nd place.

His WSOP record is also significant and includes multiple deep runs and has international reputation. He is also a core member of the PokerGuru Staking (formerly AceJack stable) and many novices have become pros under his guidance. The upcoming 50th WSOP has surely tickled his curiosity and he would probably be looking to make the pilgrimage again and aim for a bracelet or two.