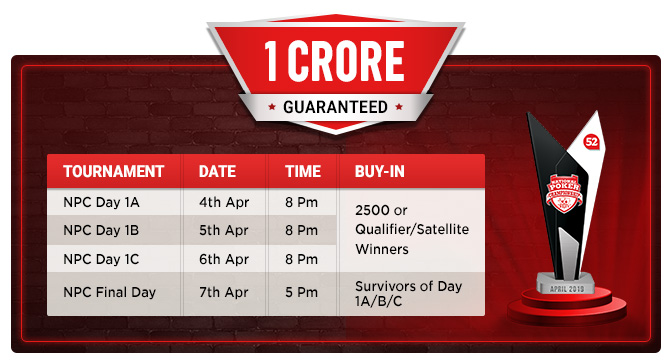 
Adda52 is a reputed online poker brand in India. It started its operations back in 2011 and, over the years, it has been at the forefront of the industry. It hosts some of the most popular signature and feature tournaments on its site that attracts hordes of poker enthusiasts from around the world.

Recently Adda52 announced another such tournament to be hosted next month called National Poker Championship 2019. The tournament is scheduled between 4-7 April 2019 with 3 starting flights on the first 3 days and an NPC Final Day hosted on 7th April. Here is the complete schedule of the 2019 NPC:

What’s more impressive and helpful for young and budding players is that there will be Free State Qualifiers hosted for 20 states and combined qualifiers for the North Eastern states. The best part is that if you have played at least one cash game after 1st February 2019 then you will receive a qualifier ticket for the state you live in. Here is the schedule for the state qualifiers: 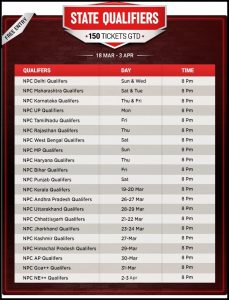 If you still don’t win a seat from one of the above qualifiers, Adda52 has decided to host a slew of satellites with over 500 NPC tickets guaranteed in total. These satellites will be hosted multiple times daily on the platform and has low buy-ins ranging from INR 1 to INR 250. Here are the details: 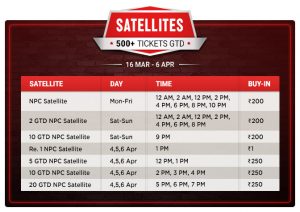 Those who earn a seat to the NPC 2019 can choose to play in either of the 3 starting flights, which costs INR 2,500 per entry. With this, Adda52 has once again made headlines. A pan-Indian tournament like this was much needed in the scene where players from all states can compete against each other for top cash prizes.

Adda52 will be hoping to make another landmark achievement in its already impressive list of promotions and tournaments in the past. You can check out the complete details of NPC 2019 on Adda52’s page here. Keep reading GutshotMagazine.com for more such tournament announcements and general poker news.