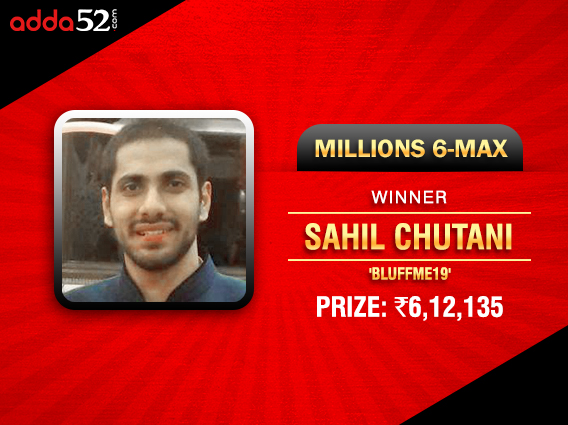 Yesterday, Adda52 hosted some of its biggest weekly tournaments. The platform is one of the leading ones in the Indian online poker scenario, and is home to big and iconic events like Godfather, Gayle Storm, etc. Yesterday, Adda52 hosted their Millions 6-Max and another event called as Grand FT (Final Table) which awarded 8 Vegas packages.

The tournament began yesterday at 8 pm, the usual time for Millions each Sunday. The tournament attracted 223 entries (78 re-entries) for a buy-in of INR 11k. The tournament ended at 4.22 am today morning and the long grind of over 8 hours ensured one of the best circuit players, Sahil Chutani aka ‘bluffme19’, won INR 6,12,135 for finishing first.

Chutani beat Rohit Begwani aka ‘rohitbegwani’ in heads-up, a PokerBaazi MoneyMaker and Spartan SSS ME winner, who settled for INR 3,56,800 as second-place cash prize.

Chutani is a well-accomplished online player. Among his recent wins and deep runs are Sunday SuperStack on Spartan where he earned INR 7.28 Lakhs. He is also an avid live player and has played in hotspots like Manila, Macau, etc. His best recorded live cash was earned in 2018 APPT Macau Main Event for $21,352 (15th place).

His family has another talented poker player in his brother Ishan. Ishan is also a known regular and shipped Adda52 Godfather last week. Sahil, with this win, will add a good amount to his already filled bankroll, and he’ll be hoping to ship plenty more in the future.

Yesterday also saw a total of 8 INR 2 Lakhs Vegas packages awarded to the top 8 players of the Grand FT. It was a single tournament where top 8 received Vegas packages. The tournament began at 5 pm last evening and ended at 12.48am this morning, attracting 453 entries (including 176 re-entries) in all.

The eight players who’ve won the package are:

Singhvi, Kumar, Kwatra, Tulsyan and Gandhi are all well-known community entities and have previously won numerous tournaments and accolades. Tulsyan has won Adda52 Millions in June 2018 before and has added yet another victory yesterday.

SInghvi has won a lot of online as well as live tournaments. His record is staggering and looks like a shipping yard with all his title wins. He also recently won the chance to play with Patrik Antonius in Goa. He earlier won 2018 WPTDS India Mega Stack for INR 5.71 Lakhs.

Vineet Kumar had shipped Destiny and Cool Leaderboard on Spartan last September for a good amounts. He also has made numerous deep runs in previous tournaments. Kwatra is a Millionaire winner along with having title wins like PokerBaazi Bout and Spartan SSS to his name.

Coming lastly to Gandhi, he has seen many deep runs and title wins recently, like winning a title in the recent Spartan SSS, his first DareDevil title and Mega Freeze, all in 2019 itself. All the above players are very good players and will be looking to run deep in the upcoming WSOP 2019, which is always the highlight of any given year in poker. Keep reading GutshotMagazine.com for more such tournament updates as well as for general poker news from around the world.