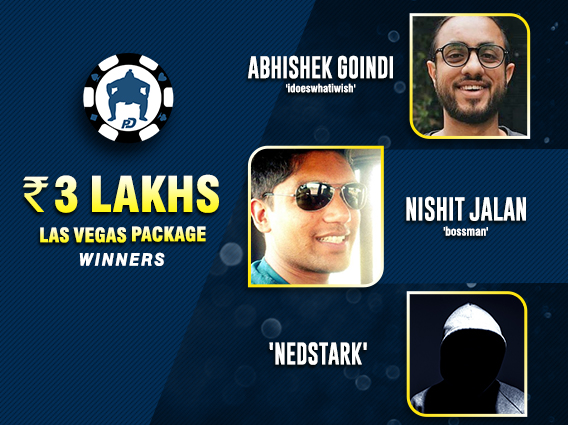 
PokerDangal is a company in the scene which has seen growth in recent times. They have hosted a few tournaments and series which have gained quite some popularity in the past. Among their recently hosted series was the Dangal Value Series which had over INR 17 Lakhs in series guarantee. They also hosted a cash game race where a Mercedes-Benz was up for grabs last November.

PokerDangal had hosted promotions in the month of February which awarded INR 3 lakhs packages to three winners in the duration of the month. The three winners are:

All the three mentioned names have won INR 3 Lakhs all-expenses paid packages each to fly to Las Vegas for the upcoming 50th anniversary edition of the world’s largest poker festival, World Series of Poker (WSOP). WSOP, this time, is going to be an affair with some events scheduled that are a first for WSOP and for the world of poker.

Abhishek Goindi, the first on the list, is a well-accomplished live/online player himself. He has a lot of online wins from previous tournaments and series. In December last year, he won Adda52’s Chip Up Series Main Event and made INR 2.5 Lakhs there.

On live felts, Goindi bested the DPT 65k High Roller last month for an awesome first-place cash prize of INR 14.5 Lakhs. He now sits with over $260k in total live earnings and is currently India’s 14th ranker in All Time Money List. He has been playing since a long time and in 2012 made his biggest live cash of $136,245 as runner-up in the Red Dragon event in Macau Poker Cup.

Goindi is someone who must’ve been over the clouds when he won the Vegas trip, since live aficionados like him are waiting all year to take a pilgrimage to Las Vegas for the WSOP festival. He has bagged an awesome chance, thanks to PokerDangal, and will hope to earn the much sought-after WSOP bracelet.

Nishit Jalan has also bagged an awesome chance to fly to Las Vegas, which he must be dreaming of for a long time. He is relatively lesser known in the community be he’ll be creating waves in the community if he wins or runs deep in any of the WSOP events.

Keep reading GutshotMagazine.com for more such promotional news and for your daily dose of poker news from around the world.