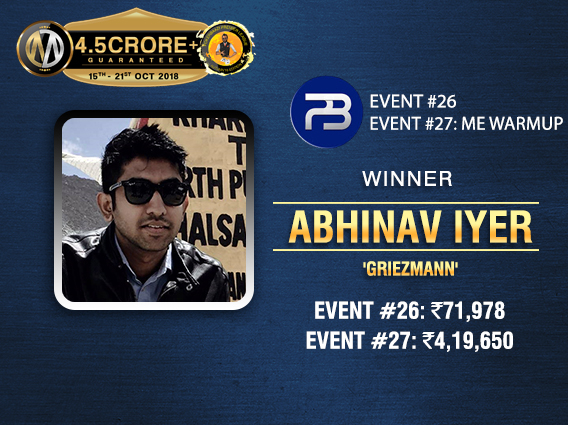 The PokerBaazi Premier League (PPL) Autumn Edition has been a massive success so far. Yesterday was Day 6 of this tournament and the success continued, with more guarantees being smashed and more winners being crowned during the course of the day.

One more live and online poker pro who got among the action in the PPL Autumn edition was none other than Abhinav Iyer aka ‘griezmann’ who won not one, but two titles during the day – an achievement only Anirban Das aka ‘pottysingh’ has achieved so far in this series.

He also catapulted to #6 on the PPL Leaderboard, where ‘WhySoSerious’ has managed to maintain his lead at the top. The amazing day for Iyer began in Event #26: INR 2 Lakh GTD Time Bomb, where the guarantee was beaten once again, to take the prize pool up to INR 2.9 lakh.

A total of 116 players took to the virtual felts in this tournament and eventually, each one investing INR 2,750 to take part in this tournament which ended in just 60 minutes. It was Iyer who came out on top of the field to take home the top prize of INR 71,978, which would’ve been a confidence boost ahead of the big tournaments coming up.

Next up was Event #27: INR 20 Lakh GTD M.E. Warm-Up which was quite literally a warm up to the mega Main Event, which takes place later today. Again, it was Iyer who took down this major title, this time beating a much bigger and stronger field in this INR 5,500 buy-in tournament.

The field was of 436 entries and this took the prize pool up to INR 21.8 lakh. 39 players finished in the money but none took away a bigger pay-check than Abhinav Iyer, winning a whopping INR 4,19,650 for first place. He beat ‘singhsaab’ in heads-up, who also won a decent amount of INR 3,10,650 for finishing second. Now remember, this guy has been having a great time across all major platforms, recently winning the Godfather on Adda52, and before that, taking home an SSS title on Spartan as well.