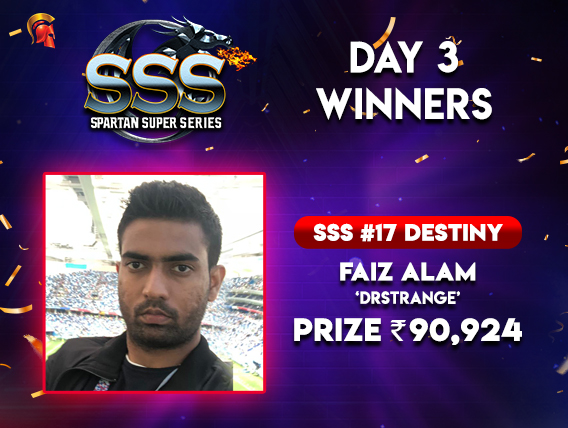 Yesterday saw the third day of the high-stakes Spartan Super Series (SSS) on Spartan Poker. A total of six tournaments lined up the previous day to witness a few of the fantastic poker players lured to join the event. The fantastic wrap of Day 3 crowned 6 more winners. The 7-day series is jammed with 44 exciting tournaments.

The series began on a decent note with an INR 40K GTD. A total of 191 players signed up for the tournament, all chipping in the INR 110 buy-in amount. The tournament was hosted with the top 31 places being paid with a minimum cash of INR 470. Player ‘Drifter2’ emerged victoriousafter he beat ‘Dabang’ in heads-up to bag this title. Drifter2 won with a Jh Ah while the latter folded pre-flop and the two called for a deal.

The buy-in for the second tournament of SSS Day 3 rose to INR 2,200.  The event registered 95 poker players and once again, the guarantee was slightly crossed with top 20 witnessing a paycheck. ‘Immortal Killer’ powered through this field to claim the title and the top prize after he beat ‘Novus’ in heads-up. The event turned out to be quite interesting. Immortal Killer won with As Ah against Novus’ Ks Kh.

The third tournament of Day 3 saw a field of 172 registering for a buy-in of INR 440 with a prize pool of INR 1,54,000 to be distributed among the top 31 players. ‘Chinmoku’ topped the field and shipped the event. He beat ‘Artist’, the runner-up bagging.

It all came to an end in Level #35 (5,000-10,000-700) with technically the last hand being played before the remaining players decided to do a deal. Chinmoku (574k) was chip leader and in the big blind in this final hand of the tournament. In pre-flop action, Artist raises it to 21k and gets a call from Chinmoku and the players head to see a flop of Js Qs 9c. Checks all around and we see the turn of 2c where after Chinmoku checks, Artist fires out a bet of 15k. And that’s good enough for Chinmoku to fold while Artist scoops up that pot of 51k and adds to his stacks. With that, the remaining players made a deal to divide the prize pool and Chinmoku was declared the winner with the largest stack.

A total of 156 unique players were drawn to this tournament for INR 770 buy-in and the top 27 places were paid. The tournament winner ‘Grinderrr’ defeated ‘PlayMyWay’ in heads-up to bag the title and the cash prize. The last hand of the tournament saw ‘Grinderrr’ with Ad Ts and ‘PlayMyWay’ with 6d Ac. It was interesting as the latter raised and went all-in on the pre-flop round and ‘Grinderrr’ called. While on the board 9s 8c 9c 7h 3s, Grinderrr won by Pair, 99 with T kicker.

Event #17 Destiny was a featured tournament for Wednesday and saw a massive entry of 710 players (163 re-entries, 239 rebuys). The biggest tournament buy-in was INR 5,500 and a massive prize pool of INR 35,50,000, breaking the advertised guarantee. It was shared among the top 60 players. Player Anirudh Reddy aka ‘flash’ won the tournament. ‘Lord_of_the_RINGS’ was titled the runner-up.

Day 3 concluded with the last Hi-Fi tournament INR 6 Lakhs GTD. The guarantee was surpassed, and a new prize pool of INR 8,40,000 was drawn. A total of 560 entries (78 re-entries, 217 rebuys) were attracted and the top 54 places were paid. The tournament was excelled by ‘ONmyMAC’ who defeated ‘StuUngar 0022’. ONmyMAC won by two pairs, QQTT while StuUngar 0002 was pushed to the second position.

The upcoming SSS Day 4 comprises a range of events for the participants. The highlight is today’s Head-Hunter 12 Lakhs GTD. So, keep reading GutshtoMagazine.com and stay tuned!