The 3rd and the final starting flight of 2019 Aussie Millions AUD 10,600 Main Event just got in the books. A total of 4 Indians participated on Day 1C of ME – Vinod Megalmani, Aditya Sushant, Raghav Bansal and Paawan Bansal, and they all played some phenomenal poker to progress to Day 2 out of the 191 that went forward from Day 1C.

The last starting flight saw a total of 364 entries signed up. Adding this to Day 1A’s 165 and Day 1B’s 268, we have 797 total entries, just 3 short of previous year’s record 800 entries. However, the 2019 turnout is expected to make a new record since the late registration is open till Day 2’s first level.

Raghav Bansal made a deep run throughout the day and finished with a big stack of 114,000. A few good spots and Raghav can easily make it to top 10 in Day 2. The chip leader to emerge on Day 1C was New Zealand’s Cole Swannack (pictured below in another event) with 208,200 chips. Swannack has Day 1B’s chip leader Julian Stuer beat by extra 11.7k chips.

The next Indian to follow Raghav is Paawan Bansal who has bagged 49,000 chips at the end of the day. He sits a little above average in chip counts, the lowest being 8,100 chips of China’s Haitao Luan. Megalmani and Sushant follow the Bansals with 32,300 and 29,200 chips respectively. 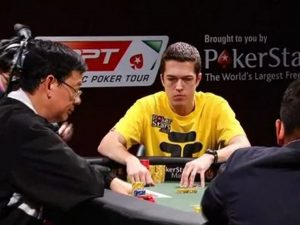 Megalmani has already made a mark in the 2019 Aussie Millions. He made a deep run in the AUD 1,150 Terminator event and finished 5th for USD 14,000 (~INR 9.9 Lakhs), securing his place out of a field of 389 entries. The recent Spartan Millionaire winner will be looking to make a deep run in the Main Event too, continuing his trend in the series.

India’s first WSOP bracelet winner Aditya Sushant also managed to get a bag at the end of Day 1C. He is the lowest among Indians in chip counts but knowing his skill-level and his ability to chip up considerably, we won’t be surprised if he takes a huge lead on Day 2.

Coming to the chip leader Swannack, he had a bit of a déjà vu moment since 2018 Aussie Millions ME saw him bag the Day 1B chip lead, 10k less than this time’s chip stack of 208,200. He has finished in the money in two side-events in the series till now.

Swannack is a recognized circuit player, having made his biggest live cash of $151,644 in 2010 APPT Macau Main Event at 3rd place. If he becomes the 2019 Aussie Millions ME Champion, he’ll add at least over AUD 1.5 million to his score, more than quadrupling his current earnings by a huge margin. 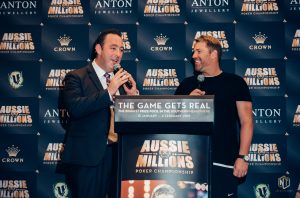 Some notables to progress to Day 2 from Day 1C were Tobias Ziegler, Natural8 Pro Michael Soyza, Thomas Muehloecker, Dominik Nitsche and Terminator Champion Ioannis Angelou-Konstas. Former International cricketer Shane Warne opened the day by announcing the war-cry ‘Shuffle up and Deal’ and even played in the race but got busted.

2018 GPI Female Player of the Year Kristen Bicknell, AUD 25k Challenge winner Rainer Kempe, Natalie Teh and Michael Addamo were some of the notables to hit the rail on Day 1C of the Main Event.

Day 2 of the Main Event will see 405 players battling it out, with late registration open till the first level. Keep reading GutshotMagazine.com for timely updates on the Main Event as well as for other tournament results and poker news from around the world.