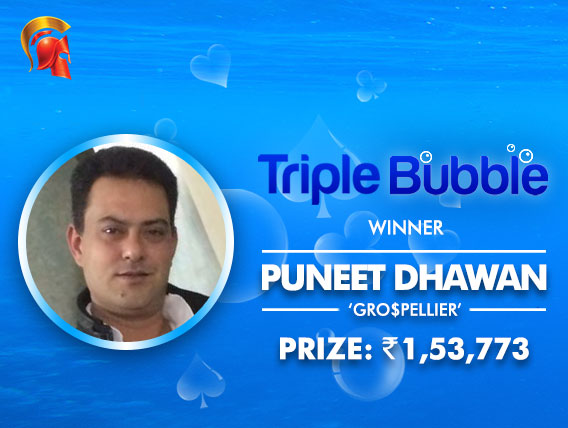 The Spartan Poker hosts featured tournaments on their website daily, with a lot of high-value tournaments to choose from throughout the week. Now, Sundays and Fridays in particular, are exciting, as these two days have more than just the single featured tournament. Yesterday being a Friday, Spartan hosted The Elite as well as the relatively new tournament called Triple Bubble.

Triple Bubble INR 9 Lakh GTD kicked off at 9pm last night with an entry fee of INR 3,300, and by the time the registration period had ended, a total field of 286 entries had joined the tournament. The prize pool eventually allowed the top 27 players to be paid out a minimum cash prize of INR 9,000.

6 hours and 38 minutes after the start of the tournament, we approached the end of the tournament, with a deal being made in 3-way play. The final three players were all similarly stacked, and they decided it made sense that they all shared the top prizes as per their current chip stacks, with no one risking coming in third and missing the big pay jumps.

A superior stack saw the title going to Puneet Dhawan, along with the top prize of INR 1,53,773, while Chetan38 finished runner-up with INR 1,38,551 and ChipTricks came third for a prize of INR 1,34,185. Remember, Gro$peLLier also won his maiden SSS title a week back, shipping SSS Event #28 on Spartan.

As the Triple Bubble tournament has three prize bubbles, Chetan38, being the tournament runner-up, wins tickets to next month’s 2oK and The Millionaire tournaments. Similarly, ‘HeatOn’ bubbled the Final Table and this player received a ticket to The Millionaire for next month, while the money bubble player ‘Zapdos1234’ won INR 3,300 in cash chips as a refund to his buy-in to the tournament. Keep reading GutshotMagazine.com for more updates on Spartan featured tournaments.