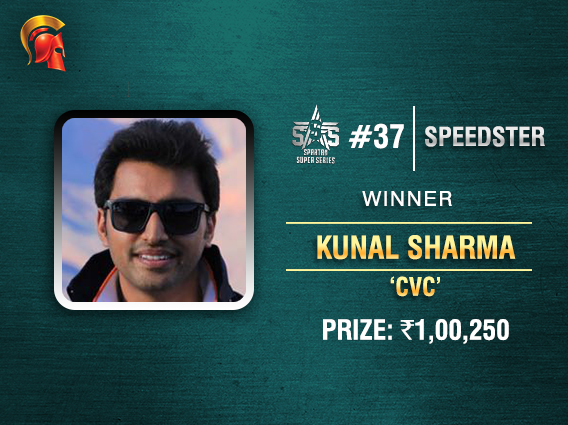 After seven days of long grinds and exciting poker action on the virtual felts of The Spartan Poker, we finally arrived at the last day of the Spartan Super Series (SSS). Plenty of new winners were crowned while some of the regulars were also among the winners as another successful SSS series was hosted on Spartan, one of India’s finest online poker platforms.

The final tournament to kick off in the series last night was SSS Event #37 Speedster INR 5 Lakh GTD and you would expect a softer field in this tournament, considering bigger tournaments like the SSS Main Event (won by Abhishek Jaiswal) and the Sunday SuperStack (won by ‘Zapdos1234’) were also being played simultaneously.

This tournament gave many lesser known players the chance to take away all the glory and that’s exactly what Kunal Sharma aka ‘cvc’ got to do, as he shipped the Speedster tournament to win a prestigious SSS title last night. The INR 1,100 buy-in tournament saw a field of 454 entries and Sharma came out on top of this field, winning and taking home a prize of INR 1,00,250.

All players were dealt reasonably good hands which prompted a 3-way all-in pre-flop in the final hand. Sharma had the chip lead and he shoved with Tc Qs, NuttieGuttie called with Jc Ah and LosingMakesNoCents called with pocket Nines. The board ran out 3s 6d Qd Th 2s as Sharma hit Queens and Tens, while the other two didn’t improve on their hands.

LosingMakesNoCents took away INR 66,650 for second place as he had the bigger chip stack while NuttieGuttie won INR 48,750 for coming third. Gutshot then caught up with the 28-year old Sharma, who has completed his Computer Science from Bits Pilani and is currently working in an educational startup as Product Manager.

He said, “I started playing poker during college days with friends just for fun at very low stakes. I’ve been playing seriously from the last year and a half. No future plans for poker as of now. I finished 10th in the Spartan Super Series leaderboard even though I played very few number of tournaments, so I’m happy.”