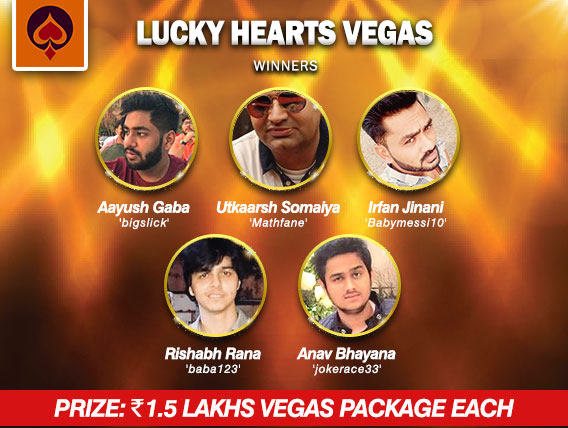 
UMA Poker is one of the up and coming poker sites in India. They started sometime last year with just a dollar and a dream and have gone on to host some tournaments and series that’ve become popular among the poker aficionados of the country. We even had a chat with one of its founders and CEO, Prashray Rai about the company’s roots, its future, etc. You can read the interview here.

In an effort to make more people aware of this mind sport and to encourage playing it, UMA Poker announced the Lucky Hearts tournament, which had a guarantee of INR 15 Lakhs, but in the form of Ten INR 1.5 Lakhs Vegas packages to play in the world’s most prestigious annual poker festival, World Series of Poker (WSOP).

The Lucky Hearts 1.0 was hosted on 24th February 2019 and saw a total of 311 entries taking part on UMA Poker (sign-up using “GUTSHOT100” code to avail 50% cashback on your first deposit). The tournament commenced at 5 pm in the evening and was in the books by 10.03 pm the same night. The tournament froze when the final 10 players were reached and each of them earned the coveted Vegas package. Here’s a list of all the 10 winners of the Lucky Hearts:

The first five in the list have claimed the Vegas package, while the next five have opted out of it and will receive INR 75k each as the decided cash prize. All the winners who are going to Vegas are looking forward to the exciting line-up of events, and WSOP this time will be hosting for the 50th time, so the golden anniversary celebrations are an added treat to the players.

Aayush Gaba, one of the winners, talked about his experience playing the Lucky Hearts, “I was left with 6 big blinds in late registration period but subsequently got two double-ups and came up strong and survived till the end.” Utkaarsh Somaiya also commented on his experience saying, “I won the INR 20 satellite into the Lucky Hearts and eventually bagged the Vegas trip. I’m super excited to go there and the experience has been great for me, thanks to UMA Poker.”

Another one of the winners, Irfan Jinani said, “I won a free ticket through a Facebook contest and I feel really lucky winning the hefty Vegas package.”

2019 WSOP has already announced their full schedule with some events that are going to be hosted for the first time in its history. All the players will be looking forward to showcasing their skills at the world’s biggest and oldest poker series. And since Lucky Hearts 1.0’s successful completion, UMA Poker has captured the community’s request for a comeback and scheduled Lucky Hearts 2.0 for 24th March 2019.

So, stay tuned to GutshotMagazine.com for updates on the 2nd one as well as for general poker news from across the planet.