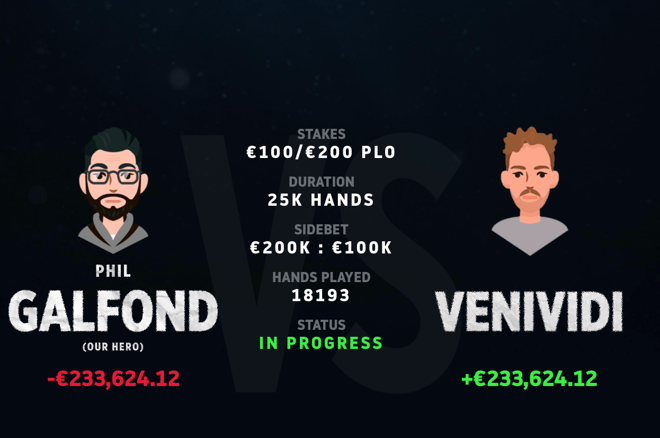 
If you have followed the action in the ongoing Galfond Challenge, you would know that the tables have turned! A few weeks ago, Phil Galfond who was about to throw in the towel is now down only €233,624 in the streets of €100/€200 Pot Limit Omaha match on Run It Once Poker.

It has been one hell of a roller coaster ride in the Galfond Challenge as the owner of three WSOP bracelets Galfond has been playing against his mystery challenger ‘VeniVidi1993’. The founder of Run It Once was stuck at nearly €1 million a few weeks ago. Unable to play his A or B game he took a short break to regroup his mind until 1 March. And now, the €600,000 swing in Galfond’s favor weighed on ‘VeniVidi1993’ enough to have him request a break although he willingly paid a pernalty of €3,000 per day.

Following VeniVidi1993’s break, Galfond also tweeted, “Reminder: I took time off after a rough stretch & had your support & respect for it. Veni seems to be taking this run at least as well & he’s like a decade younger than me. Feel free to root for me but win or lose, I hope Veni comes away from this w/ the respect he deserves.”

On Thursday, 26 March, ‘VeniVidi1993’ returned to play and Galfond continued to chip away his deficit as he secured €85,271 off his opponent. In the latest session, Galfond, who into the heads-up challenge with €318,895 and the €85,271 win has now put him down €8233,624 overall. However, VeniVidi1993 stormed back and booked a mild loss. Yesterday, another 642 hands of the 2,500-hand challenge were played putting Galfond in a good position. The stage is still set to be exciting as the finish line is about 6,807 hands away!

However, Galfond’s opponent wasn’t done, having cut his deficit to 5 figures, ‘VeniVidi1993’ cut Galfond’s win to €60,000 before Galfond recovered during the closing stretch to book a medium-size win. Both players are scheduled for another session this Friday, 27 March, starting at 12 pm. The match is currently 18,193 hands complete.