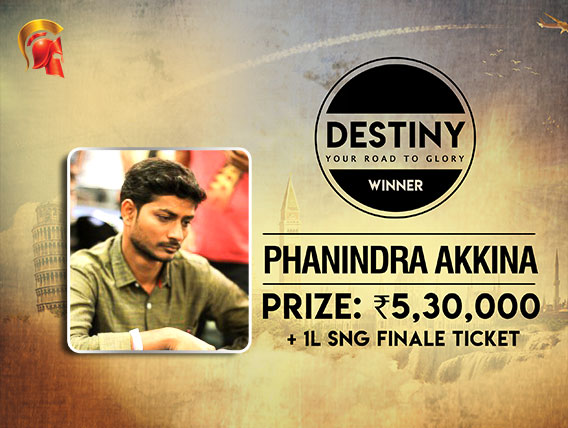 
This is one tournament you should be playing if you want to fulfil your destiny as a poker player. After sending 4 talented poker players to the Sin City, Las Vegas, The Spartan Poker launched its 5th edition of the Destiny tournament series, with one winner to be sent to play poker in Europe this time. The ten Destiny tournament winners will play in the INR 10 lakh Destiny SnG Finale for a chance to win this free package trip.

Last week, ‘vyakulkumar010’ won the second Destiny tournament and the third one took place last night, with an advertised guaranteed prize pool of INR 20 lakh. It was shipped by regular online player Phanindra Akkina aka ‘k9akkin’, who took home the top prize of INR 5,30,000. 1 lakh will be deducted from these winnings, towards a seat to the INR 10 lakh Destiny SnG Finale.

Yesterday’s tournament attracted a total of 353 entries, and Akkina finished on top of this field, beating ‘VG92’ in heads-up. There was still a respectable prize of INR 3,30,000 that went out to him for a second-place finish. The tournament, which began at 7:30pm IST last evening, ended in the early hours of today’s morning, after over 8 hours of grinding.

It all came to an end in Level #51 where the blinds were running 15,500/31,000 – 3,100 and ‘k9akkin’ had already built himself a very commanding heads-up chip lead. He thought it was the right time to go all-in pre-flop when he saw his hole cards to be A-K. VG92 called with 9-7 but he had no other choice given his diminishing chip stack. The board opened 2-A-7-A-Q, giving Akkina an Aces three of a kind by the turn card, while VG92 lost the pot, only managing two pairs – Sevens and Aces.

We caught up with the winner to ask him what it felt like to win such a big tournament. He said, “It always feels good to win such a signature tournament. It’s a great initiative from The Spartan Poker by creating a wonderful opportunity for players to take a shot at major global events.”

“The prize money will serve as a bankroll boost before the India Online Poker Championship (IOPC), where I intend to play a majority of events. I will continue to play online on and off, as of now,” he said, talking about his poker plans for the near future.

Keep reading GutshotMagazine.com for similar daily updates on poker tournament wins from India and around the world.