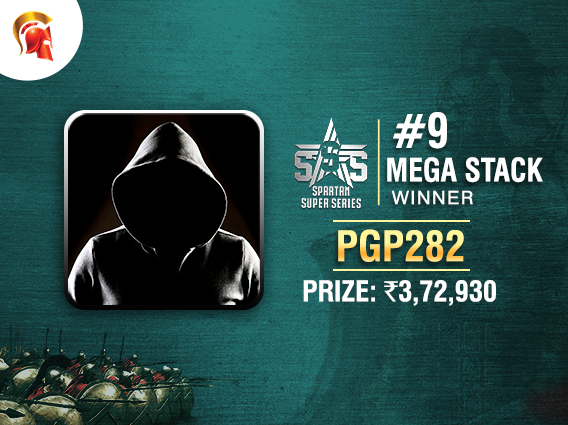 
The excitement levels have been very high in the Indian poker industry since the last couple of days, with the September edition of the Spartan Super Series (SSS) taking place. Yesterday was Day 2 of the series and after three smaller tournaments taking place earlier in the day, we were set for the biggest tournament of the night – Mega Stack!

SSS Event #9 Mega Stack INR 15 Lakh GTD kicked off at 7:30pm last night and this tournament always sees some of the best pros taking part. It is a part of Spartan’s featured tournaments and yesterday’s tournament saw a total field of 465 entries taking place. This beat the guarantee and generated a new prize pool of INR 18.6 lakh.

Beating the field and taking away the largest chunk of this mega prize pool was ‘pgp282’, who took away the biggest prize of the night on Spartan. The player won INR 3,72,930 for this effort and also finished the day at #5 on the SSS leaderboard, where a total of INR 10 lakh is being given away in prizes.

Yesterday’s INR 4,400 Mega Stack tournament saw the top 39 players winning a minimum cash prize of INR 12,834, but none did better than pgp282. The player dominated the field last night and his final victim was heads-up opponent ‘FreeFlow’, who he knocked out to end the tournament at 1:44am this morning.

It was Level #57 of the tournament when he witnessed what became the final hand. Prior to the hand, pgp282 had a chip lead of 5:1 and he didn’t hesitate in making the pre-flop all-in call, as he held pocket Queens. FreeFlow on the other hand, held Ks Jh and he needed a King on the board to get ahead.

The board ran dry, with 6c 9s 8c 5h 2d opening and both players not improving their hands. pgp282 thus took away the pot with a pair of Queens and FreeFlow had to settle for the runner-up prize – which was still quite a handsome one – of INR 2,47,938. FreeFlow also finished second in the SSS Mega Freeze on Monday night and he ended SSS Day 2 at #6 on the SSS Leaderboard.

Gutshot caught up with the winner whos wished to stay anonymous. He commented on the win, saying, “I had connection issues in the first hour, folded QQ and AK preflop. Post that, had to take close spots to build up a stack. Somewhere around final 3 tables, the legend “pokerbatman27″ was on my right. I remember thanking god he is to my right and not left :). He was chip leader then with 2x my stack, I was 2nd. I decided to put pressure on him despite ICM implications. It worked, and didn’t face many problems after that.”

Keep reading GutshotMagazine.com for more updates on who become the big winners in the ongoing Spartan Super Series.