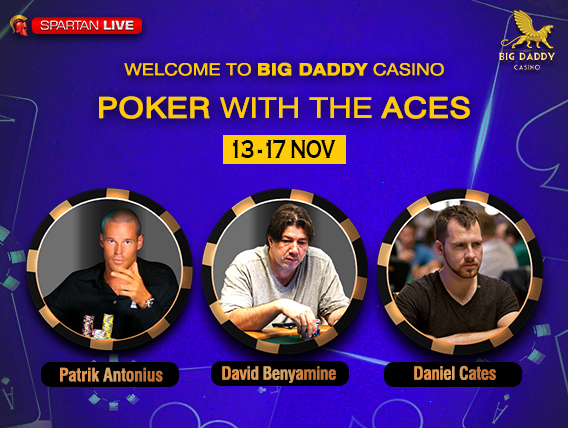 
The Indian poker industry keeps growing at a rapid pace and in recent months, there have been plenty of factors contributing to that growth. Very recently, the world famous Dan Bilzerian was invited to the India Poker Championship in September, on board the Big Daddy Casino in Goa.

Now, Finnish poker pro Patrik Antonius is all set to make the journey down to Goa, invited to play poker in the Big Daddy poker room. He will be playing a high-stakes cash games festival which is scheduled to take place between 13-17 November 2019!

It was only last month that the ‘King of Instagram’ Bilzerian made an appearance at the Big Daddy poker room. Now, Antonius will be among the high-stakes pros in action, while French pro David Benyamine has also been invited to be a part of the celebrations. Antonius has $12+ million in live tournament cashes while Benyamine has $7+ million.

Coincidentally, both these world-famous poker pros have been former professional tennis players and are now poker pros. Currently residing in Monte Carlo, Antonius recently launched his own poker tour called the Patrik Antonius Poker Challenge (PAPC), which hosted its inaugural stop in Talinn earlier this year and Antonius won a title himself!

As for Benyamine, he was also among the top 10 billiards players in France at one point, while now sitting at 5th place on France’s all-time poker earnings list. His highest live cash of AUD 1.1 million came at the 2011 Aussie Millions where he finished 3rd in the Super High Roller while also winning a gold bracelet at WSOP 2008 in Las Vegas!

Also invited to play high stakes during the 13-17 November period is US pro Daniel Cates also known as ‘Jungleman’ who is considered to be one of the best heads-up NLHE players in the world. With over $7 million in live tournament cashes through his career, we have no reason to deny that either!

It’ll be fun to watch these three in action in Goa as they play poker at the Big Daddy Casino with some good high-stakes Indian players too. For more stories on similar poker news and updates from around the world, stay tuned to GutshotMagazine.com.