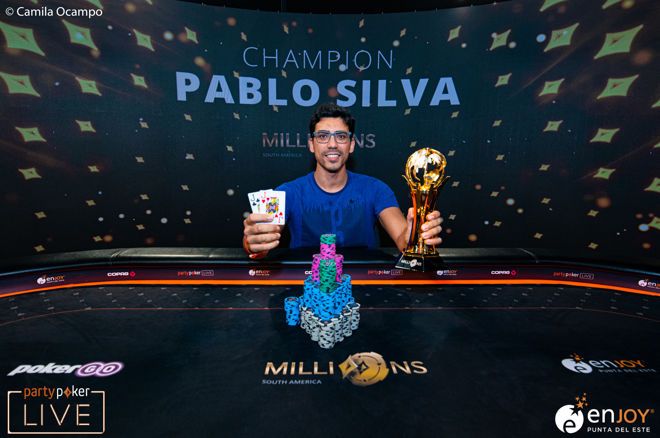 
partypoker MILLIONS South America saw Brazilian player Pablo Silva flip his fate overnight. Entering with a bankroll of $41,776, he turned into a millionaire after taking down the major attraction of the entire series $10,300 Main Event which also proved to be the biggest win of his career!

The Main Event commenced on 6 February and a field of 456 runners were registered across two starting flights at the Punta del Este in Uruguay, but the tournament failed to meet the $5 million guarantee. The money bubble burst on Day 2 when Brazil’s Yuri Dzivielevski fell in 66th place, becoming the bubble boy and giving way for the rest of the survivors to lock up at least $20,000.

Day 4 began with Daniel Rezaei returning with the biggest stack of 138,800,000. The first player to leave the table was Rafael Caiaffa in 9th position. Pedro Madeira followed. Next in line was Dzimtry Urbanovich who started his day with the shortest stack and fell out in 7th position when his Ace King failed to dominate the pocket nines of Rezaei. After a few more eliminations and Rezaei’s dismissal, heads-up got underway which did not last too long.

Silva had a 6:1 chip lead over Fabio Colonese. The tournament ended with Silva holding Jh Jc and Colonese shoving for 60 million with 8c 6d. The former made a quick call and flopped a full house on the Jd 4h 4d board. 5h and Ks on turn and river, respectively, completed the board. Silva lifted the partypoker MILLIONS trophy along with $1 million while Colonese walked out with $640k.

For more updates on online and live poker tournaments taking place around the world, keep reading GutshotMagazine.com and stay tuned!