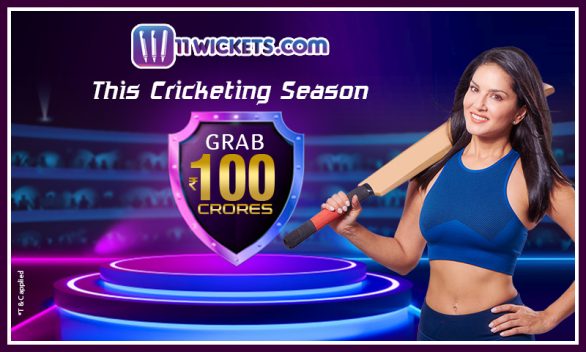 Over 100 CR up for grabs on 11Wickets this cricket season


Cricket is already a massive fan sport in India and this year, the Indian audience has action-packed entertainment ahead of them. The Indian Premier League (IPL) 2019 will have the cricket fanatics hooked following which the ICC World Cup take place later in the year, which is again a major event in international cricket.

Taking advantage of this, many companies which weren’t related to online fantasy sports have opened shops in this space. Recent examples are Paytm and Yahoo which both have offered fantasy platforms to the players of this country, although the Paytm venture isn’t real-money based as yet.

11Wickets, a fantasy cricket brand, was already doing good in the industry till now but recently they announced a whopping INR 100 Crores giveaway on their site for this season until mid-May. The offer is valid for both new and existing users of the platform. The platform will give away up to INR 1.5 Crores in every match until IPL 2019.

Around 20 Lakh registered users play on 11Wickets as of now. Users who wish to play on the platform would have to register first and then select the match they want to play in. Based on the results in the real world they will earn points, which could be redeemed for cash prizes.

11Wickets has recently introduced some exciting and never-before seen features. They even improved their existing platform. Users now get the chance to select a substitute player (12th Man), get live scores and player rank update on their platform through Sportradar, and also edit teams till the last minute, like Dream11’s recent decision.

Bollywood actress Sunny Leone is associated with this brand since last August. The company has taken major steps forward in recent times. They announced a partnership with Amazon Pay. They are significant in the market, though Dream11 is helming the industry by far.

Keep reading GutshotMagazine.com for more such fantasy sports updates and for general gaming/gambling news from around the world.